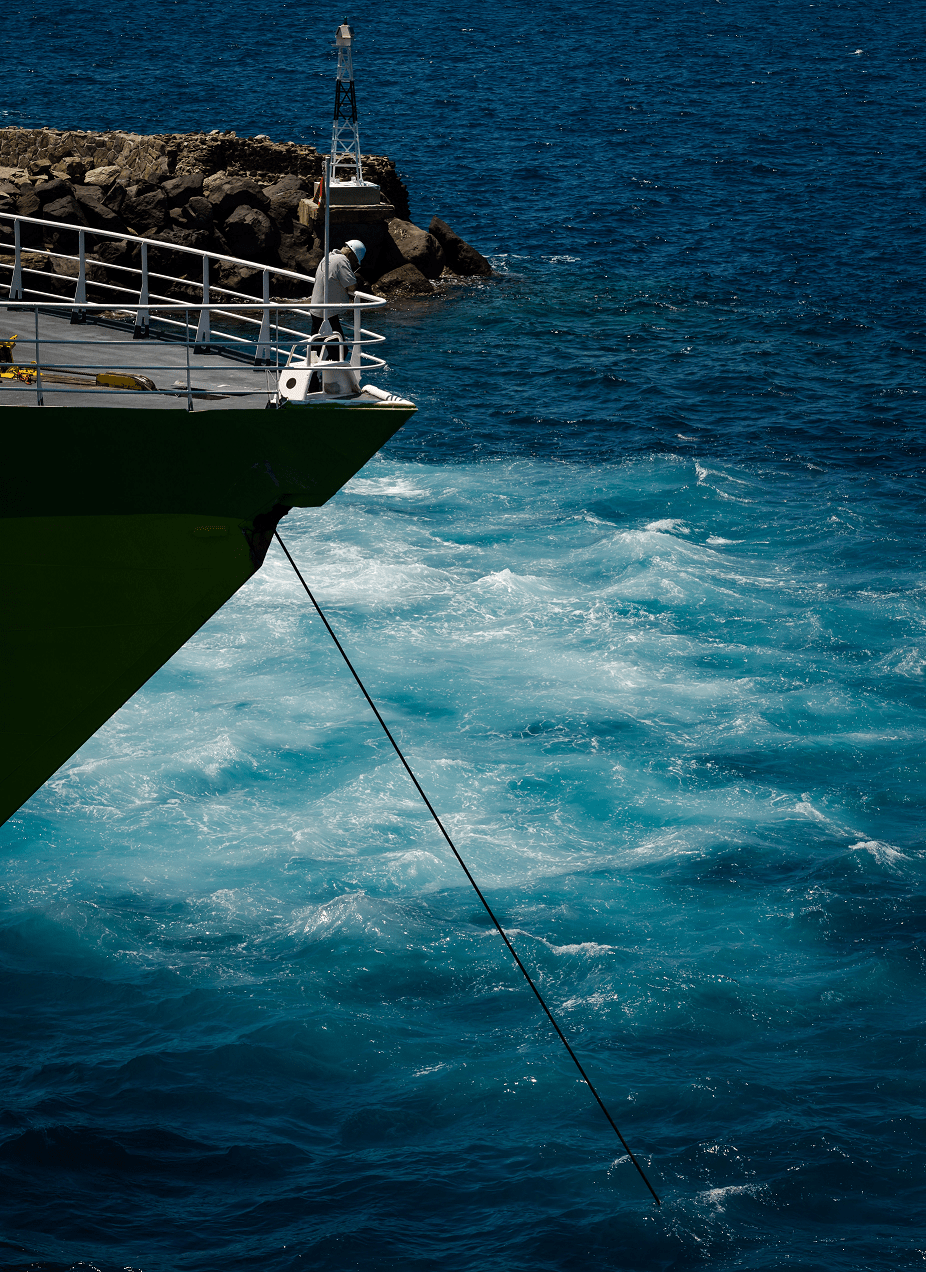 Anchoring is a fundamental and sensitive operation for a vessel. When a vessel is at anchor, it swings to align itself along the direction of the dominant environment. The anchor is supposed to hold the vessel in varying environmental conditions depending on where the vessel is being anchored. Thus, it is critical to know if the anchor has enough holding power when the weather goes inclement. While vessel masters have reliable experience in knowing the holding power of their vessels and decide based on their invaluable practical knowledge, an estimate of the forces which the vessel is experiencing in a particular weather is always useful in knowing whether the anchor can hold or not, helping in critical decision making on whether to remain at anchor or let go – thus saving the vessel from a potential damage of anchoring systems.

In this article we will present a simple method based to estimate the holding power required for an anchor operating in a given environmental condition. The method is based on OCIMF’s publication ‘Estimating The Environmental Loads On Anchoring Systems‘.

Basically, the two steps involved are:

Step 1 : Calculating the wind, current and wave load on the vessel to give the total environmental load

An anchoring system is subjected to the three primary environmental loads – Wind, Wave and Current. The simple outline of the method is to find out what these loads are, sum them up and check if the anchor has enough holding power to overcome the combined environmental loads.

However, the method is NOT universally applicable to all types of vessels, and is limited only to Oil Tankers or Gas Carriers with accommodation located aft. The method can be used for tankers down to a DWT of 16000 MT. Further, only a static condition has been considered for calculation of forces. This means that the effects of the vessel’s own motion (pitching, heaving etc.) have been ignored. The vessel is considered as static while the environmental forces of wind, wave and current act on it. It is to be noted that dynamic effects can have a multiplier effect on the forces obtained from the static condition. The method also ignores the interaction among the three forces, and assumes that the vessel is lying to a single anchor and longitudinally aligned with the anchor chain. Thus, all the three forces of wind, current and wave need to be considered only in the longitudinal direction of the vessel. Catenary effects of the mooring chain are ignored.

However, there are some important assumptions which the method relies upon. These are:

• the vessel is an oil tanker or an LNG carrier (spherical or prismatic) with accommodation aft
• environmental forces acting on the vessel comprise:
wind
current
waves (mean wave drift force).
• the data presented refers to the static condition. It should be noted that dynamic effects (e.g. yawing, pitching) can result in forces in the anchor system being 2 or 3 times higher than the estimated static forces.
• the environmental forces are considered as individual components that are summed to provide a total force. Interaction effects between the forces are not considered.
• the vessel is lying to a single anchor.
• the anchored vessel is in a steady position, having swung at anchor in the direction of the dominant environmental force or has reached an equilibrium position.
• the vessel lies at anchor such that the lead of the anchor chain is parallel to the centreline of the vessel. As a result, only the longitudinal components of the wind, waves and current forces need be considered.
• wave drift forces have been estimated using a Pierson-Moskowitz sea spectrum.
• the catenary effect of the anchor chain is not considered

The environmental loads of wind and current are estimated from the non-dimensional coefficient curves provided in the OCIMF document, which in turn are taken from OCIMF Mooring Equipment Guidelines (MEG). The OCIMF document on anchoring refers to MEG Edition 3; however, MEG has been updated to Edition 4, and the same shall be referred to in this article. 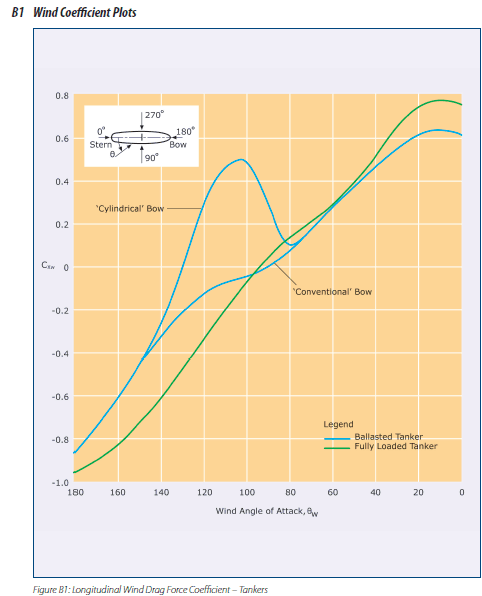 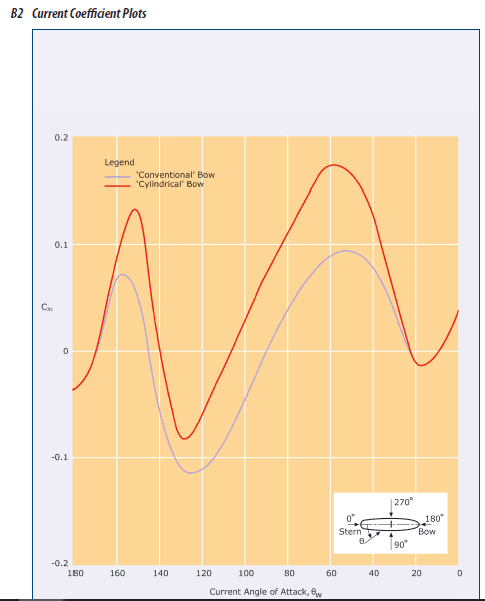 Once the wind and current drag coefficients are obtained, the standard physical equations can be used to determine the applicable forces. Only the forces in longitudinal direction are considered. The formulas are presented below:

AT = Transverse Windage Area of the Vessel (m2) 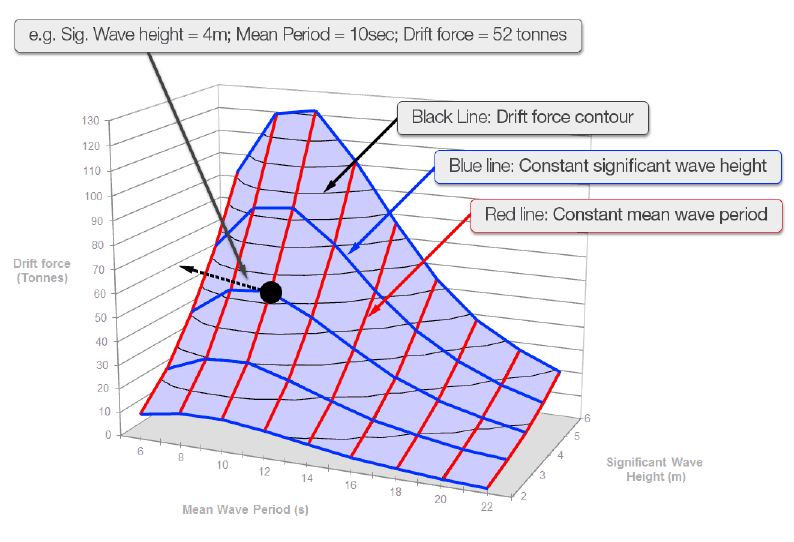 For the anchor to be adequate for holding this vessel in the given environment, the anchor’s holding power FHOLD must be greater than the environmental force, i.e.,

Anchor holding power can be estimated form the anchor’s weight and a factor for the type of seabed. The formula is below:

The table from OCIMF (reproduced below) gives the typical anchor weights for Tankers and Gas carriers of different sizes.

The seabed factor depends on the type of seabed and also the category of anchor (Standard Anchor vs High Holding Power, HHP Anchors). The following table from OCIMF document gives the seabed factors

If the anchor holding power is found insufficient against the environmental load, then there’s a possibility of the anchor being dragged which is a dangerous situation and can lead to collisions and grounding. This calls for corrective action like preparing the vessel for manoeuvring, deploying more cable etc. However, prevention is always better than corrective action, and it always helps in knowing beforehand the expected environmental forces on the vessel and check if the anchor has sufficient holding power.

TheNavalArch’s app for Anchoring Loads Calculation is a easy-to-use tool which is based on OCIMF MEG-4 and can be used to estimate the environmental forces on a Tanker/Gas Carrier and make an informed assessment of whether the anochor is suitable or not.

You can check the app below.