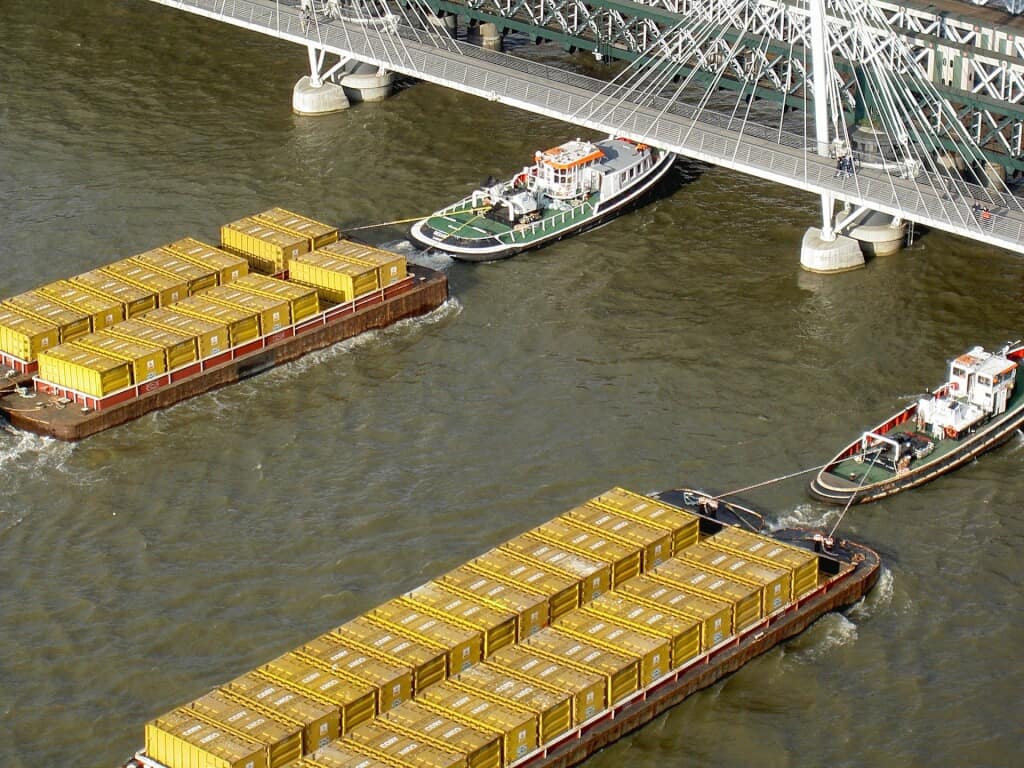 Bollard Pull calculation is one of the most frequent calculations performed in marine towing operations.

Towing operations involve the pulling of a vessel (it can be a barge, ship or an offshore structure) using another vessel (usually a tug).

From a very basic point of view, we can draw the following conclusions regarding towing

When selecting and deploying tugs for towing operations, we would like to know a few things before we make a final decision:

Each of the above questions merits a detailed explanation, and we will cover each of them separately. In this Article, we will cover the first question – how big a tug is required for safe towing of a vessel?

First, let’s clear some basic concepts. Please note that this article covers only the scenario of head sea towing.

Concept – Bollard Pull of a Tug 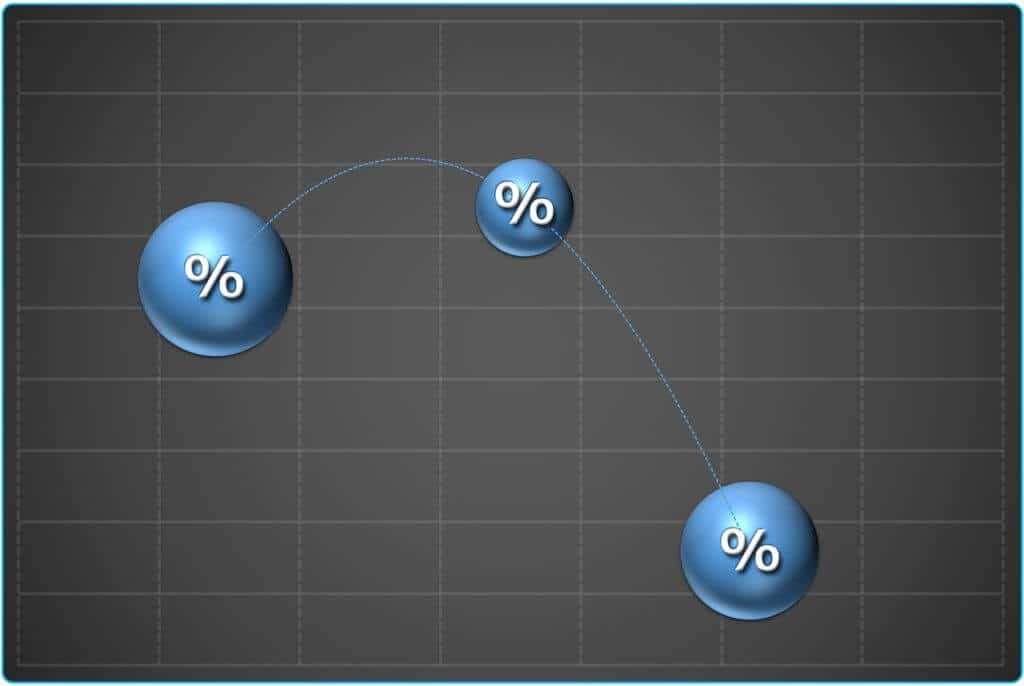 The tug has an efficiency of its own when towing the vessel in sea. It depends on the environment of the tow, and on size of the vessel towed.

If the bollard pull of a tug is denoted by BP, and its towing efficiency is denoted by ƞ, then the total available pulling force from the tug will be

How do we relate the Bollard Pull of the tug to the vessel being towed?

Basically, the vessel being towed will experience environmental forces of wind, wave and current in the sea. Together, these forces constitute the ‘Towing force’. Let’s denote it by FTOT

For the tug to be able to pull the vessel, the available pulling force of the Tug must be greater than the total force on the vessel.

Thus the Bollard Pull of the tug should be more than FTOT/ ƞ. This is called the Required Bollard Pull, and this is what we seek to calculate. Next we will see how the towing force can be calculated.

The required Towing force is defined as the force which is required to HOLD the vessel in sea under certain environmental conditions of wind, wave and current.

Please note that the towing force is the required force for HOLDING the vessel (also called STALL condition), and not for towing it.

Now, what are these environmental conditions and where do we get them from?

When towed in the sea, a vessel will experience forces of wind, wave and current. To HOLD the vessel in the given environment, we need to overcome these forces.

Industry standards like DNVGL Guidelines for Marine Transportation (earlier ND-0030, now superseded by DNVGL-ST-N001) prescribe the standard wind, wave and current parameters to be used for bollard pull calculations, depending on condition under which the towing is being performed.

ND-0030 requires that the bollard pull of the tug should be sufficient to HOLD the towed vessel in the environment stated below:

For benign weather areas, the following criteria are prescribed as per ND0030

A question naturally arises – how do we know if the tow is an open ocean tow or a benign tow? For this we need to study the environment of the route of the tow, and get the historical environment data of the route. We can get it from environment data provider like Metocean. In some cases, data from Nautical charts is also acceptable (depends on the discretion of Marine Warranty Surveyor). The wind speed, wave height and current speed should be obtained for the specific time of the year when the tow is expected to take place. For example, if the towing operation is expected in May +/- 2 months, then the environment data from March till July should be referenced. The most extreme values for the period should be utilized.

From the environment data, we can decide whether it is an open ocean tow or a benign tow. Basically, if anywhere along the route a wave of (significant) height more than 2 meters is expected, then the Open Ocean criteria is to be used. If everywhere along the route, waves of significant wave height less than 2 meters are expected, then the environment data must be submitted to the Warranty Surveyor and exemption obtained for using the ‘benign’ sea state case before proceeding with Bollard Pull calculations. 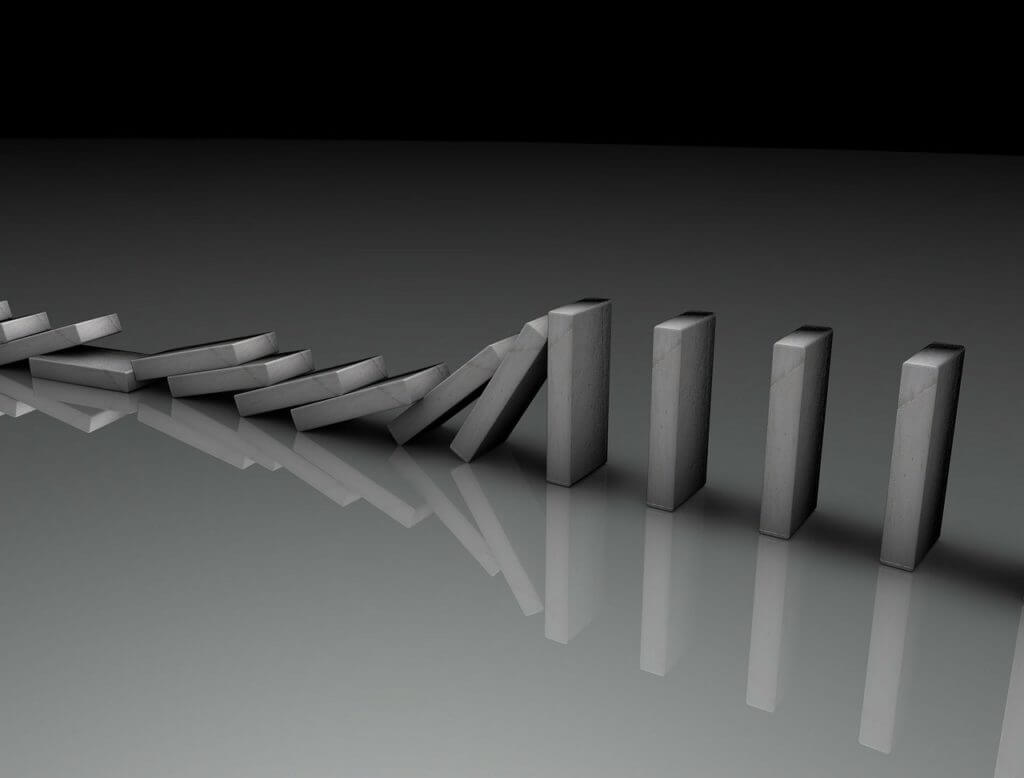 Now we can delineate the steps for performing Required Bollard Pull calculations for towing a vessel as follows:

Now we will discuss the calculation methods in detail. 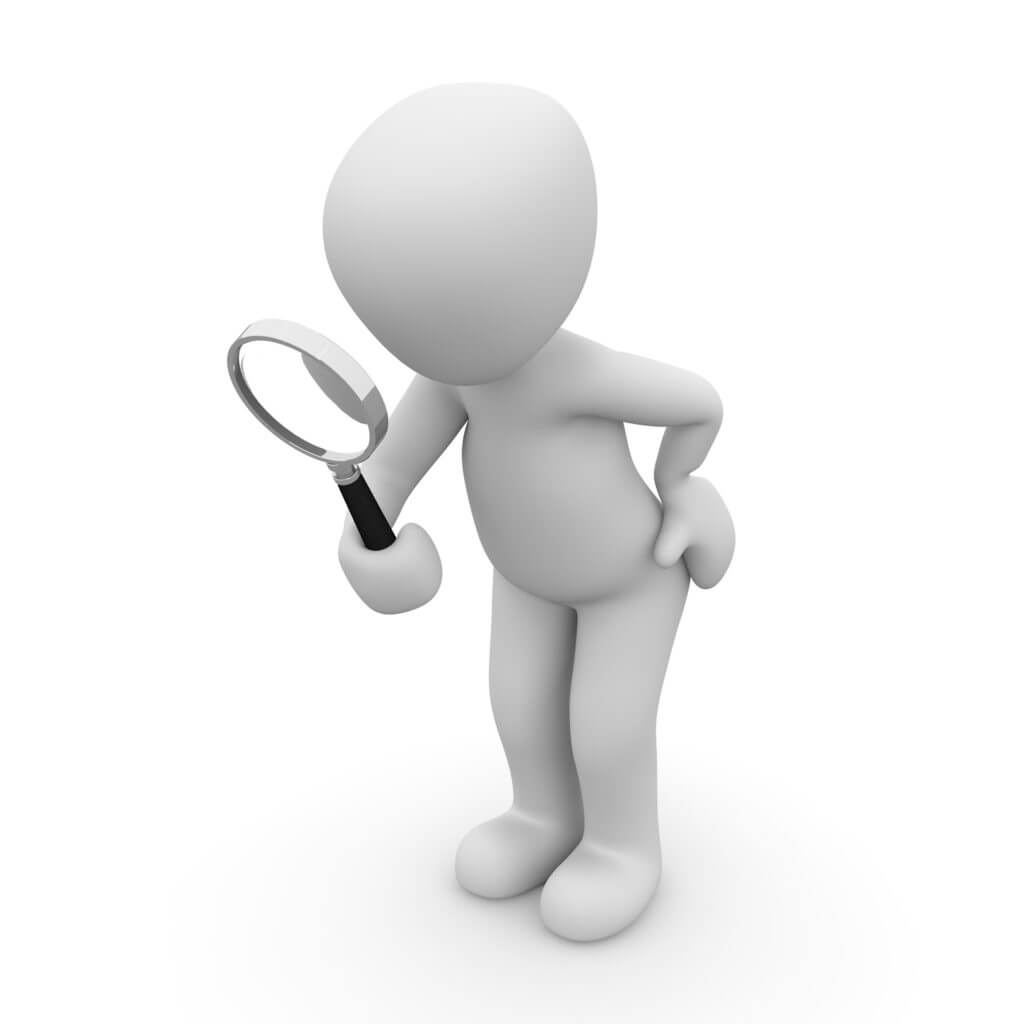 Wind forces are the forces on the part of the vessel above the waterline which is exposed to winds.

For calculating wind force, besides the wind speed and air density, we need the Transverse wind-exposed sectional area of the vessel (also called windage area)

When the vessel is being towed forward, then the transverse section of the vessel faces the winds head on.

Some points to keep in mind when calculating this transverse windage area are: 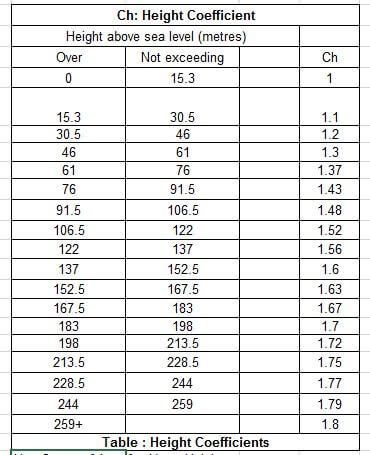 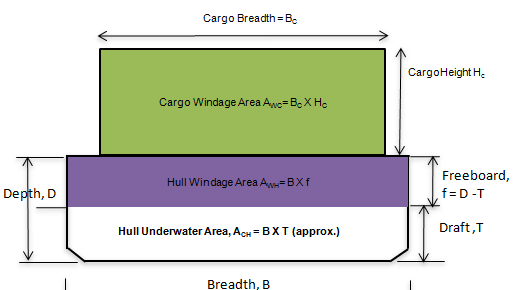 The wind force is calculated from the air density, wind speed and the transverse windage area using standard formula

The current forces are basically, the forces experienced by the underwater part of the hull.

The underwater part of the hull experiences what is called as ‘calm water resistance’. This is the resistance the ship experiences when it is moving in water without waves.

The Calm Water Resistance has many components, and is a complicated calculation. Calm water resistance of a ship can be calculated using

For barges, some studies have been done to develop empirical methods of calculating resistance. Some of them are

If the vessel is a barge, sometimes a simplification is adopted, subject to acceptance by MWS. Similar to the calculation of transverse wind force, the current force can also be calculated from the transverse underwater area.

Calculation of transverse underwater hull area is pretty simple in case of barges, which generally have a rectangular section shape. If the width of the Barge is B, and its draft is T, then the underwater transverse section area is simply B x T. If there are cuts around the bilge of the barge, these can be deducted from the area. The current force is finally calculated using the standard formula

The current force calculated above is actually the force which the vessel will experience in calm water. However, the sea is a dynamic environment because of waves which the vessel encounters. These waves add to the forces on the vessel and are these forces are called as ‘Added Wave Resistance’ or the ‘wave drift force’.

Wave drift force depends on the dimensions of the vessel, and its shape. The method for calculation of added wave resistance is provided in DNV-RP-H103 Modelling and Analysis of Marine Operations Sec 7.2.6 (see below extract).

How do we get towing efficiency?

The tug’s efficiency is affected by many factors, like, size of tug, the harshness of environment, and the towing speed. ND-0030 provides a table to calculate the towing efficiency of the Tug. If the tug’s Continuous Bollard Pull is BP, then the table provides following values for the Towing efficiency

Now that we have the wind, wave and current forces, we can calculate the total resistance force on the vessel as

Then the required Bollard Pull can be calculated as

The continuous bollard pull of tug must be higher than the Required BP for the tug to be suitable for towing.

The Marine Warranty Surveyor has a very critical role in towing operations. His role includes, but is not limited to

While the above are not regular occurrences, it is advisable for the towing operator to be proactive in treading these issues to avoid delays and surprises during the operation.

That leads to the conclusion of this Part – I. In Part – II we will discuss the method of calculating the maximum feasible towing speed for a given environment.

PS: TheNavalArch has its own products for calculating Bollard Pull required for Barges and Ships. Check them out below.