OCIMF MEG-4 and Mooring Design of your vessels – Part I 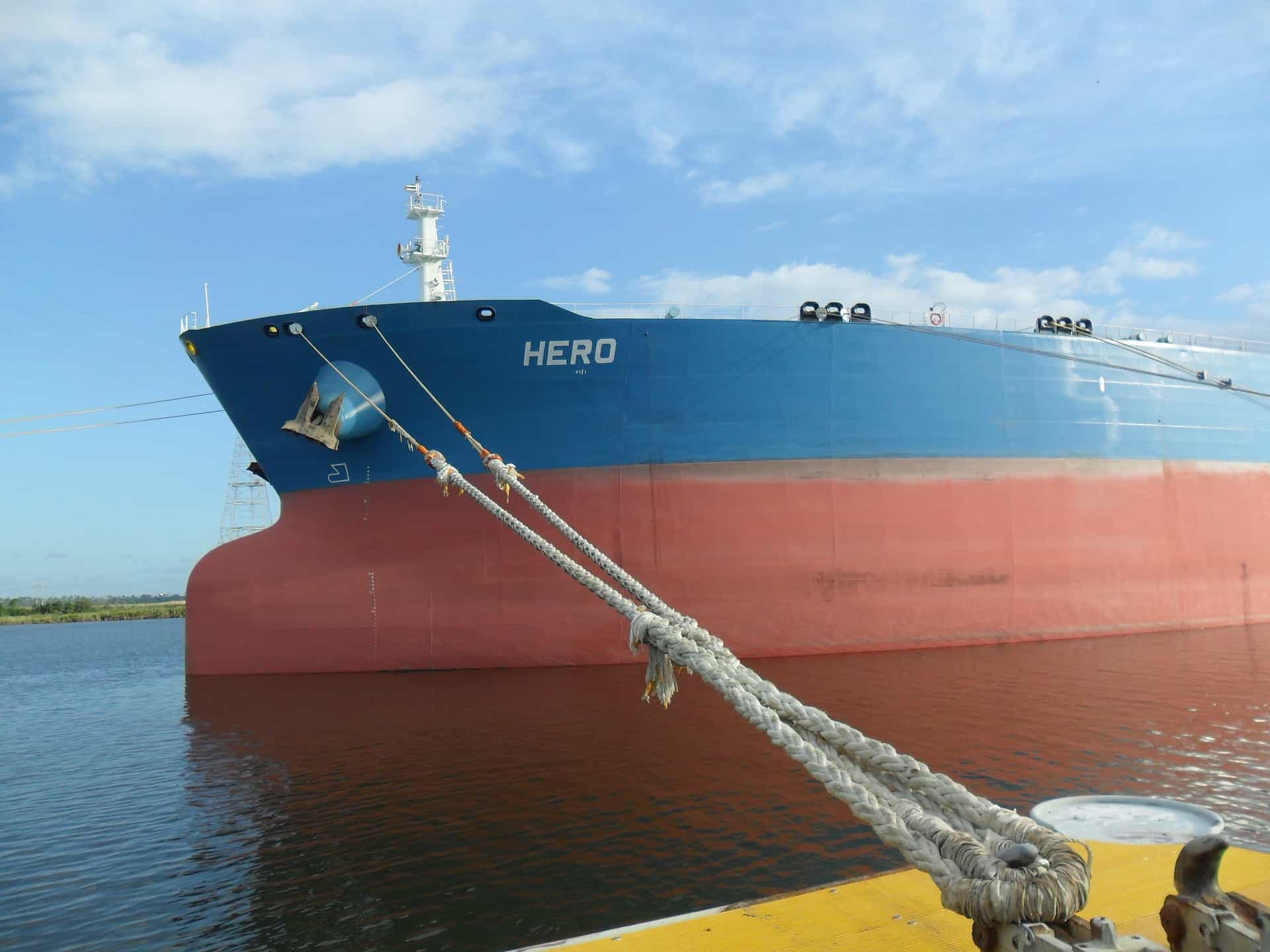 The OCIMF (Oil Companies International Marine Forum) has come out with the latest edition of mooring Equipment Guidelines (MEG) – Rev 4. This revision incorporates significant changes and updates over the MEG-3, the third Edition. The changes include, besides other additions, a guidance on documentation of mooring equipment (Mooring System Management Plan), addition of a section on human factors in mooring operations, and significant updates to the Appendix A for calculating environmental forces on tankers/gas carriers.

Mooring in the context of MEG-4 means mooring to a fixed structure like a berth, jetty, terminal or another ship. 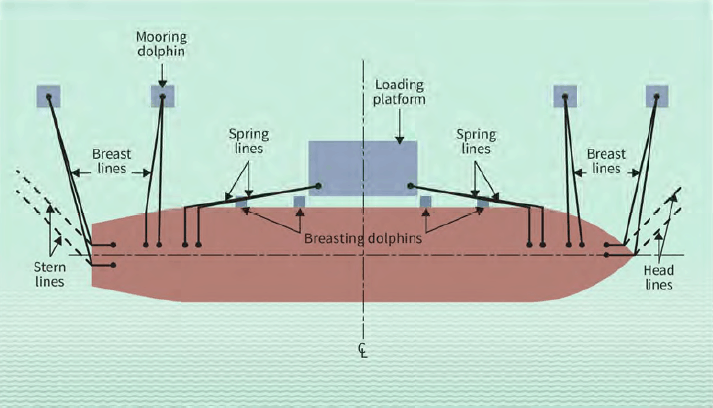 The design of mooring at berth can be broken down into a certain number of steps by thinking in very basic terms.

The problem at hand is – we are given a vessel, and we need to moor it to a berth. The first question which pops is why at all we need to berth the vessel? Why can’t we just leave it floating? Well, if we leave it floating, it is subject to environmental elements of wind, current, waves, tides etc. These will make it drift, with the possibility of hitting another vessel in the vicinity.

The next thought that comes is: what’s the best way to secure it to a berth? The simplest solution we can imagine is using ropes to tie it to strong and fixed structures on the berth. A ship needs equipment like bollards, fairleads and winches which can help secure the rope from ship to the mooring equipment on the berth.

So, how do we go about selecting the right sized rope? What about the bollards, fairleads and winches on the vessel? How big should they be? It is natural to expect that a bigger ship will require bigger sized equipment (bollard, winches, fairleads etc.) and ropes to secure it. How could we devise a method to do it?

In simplest terms, mooring involves tying the vessel to a berth using ropes so that the vessel stays in place and is not carried away by the environment. The environment may comprise wind, current, tides, waves, ice, swell etc. which the berth is subject to.

To know how many and how big ropes and what size equipment are needed, we should have an estimate of how much environmental forces the vessel is subject to. Once we know the forces, we can go about tying ropes in such a way that these are able to resist the forces.

Hence, the steps to designing a mooring system can be:

In this article we’ll look into Steps 1 and 2, while the Step 3 will be dealt with in Part 2.

The application of environmental data depends on the purpose which we’re using it. If we’re designing the mooring equipment of a specific berth or terminal, then the environment experienced at that specific berth is important. This is obtained from Metocean data for the specific berth location.

For the purpose of mooring design, it is generally recommended to investigate two extreme conditions:

The ratio of Water Depth (WD) to Draft (T) is a critical parameter affecting the current forces on a vessel. OCIMF recommends the following values to be used for the WD/T ratio:

We can see here that there will be multiple cases for which the forces have to be calculated.

Since the wind of 60 knots can be from any direction, simultaneously with current from either head/following seas or beam seas, we need to investigate all cases while varying the direction of current from 0 to 360 deg, and also varying the loading condition (ballast/loaded). To simplify, we can create cases by considering wind and current to be collinear (along the same direction), and investigate the cases listed below:

The cases are listed below: 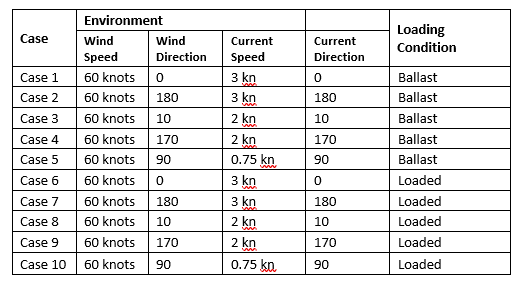 Now that we have defined the environmental conditions – wind and current, which also included the loading conditions and water depth to draft ratio, we can move on to the next step: calculation of environmental forces.

At a berth, generally it is only wind and current forces which significantly impact the design of moorings.

The environmental forces on the vessel can be calculated using the force coefficients provided in Appendix A of OCIMF MEG-4. These tables provide the coefficients for Wind and Current forces depending on the vessel heading, loading condition (ballasted/loaded) and also the Water Depth to Draft ratio. At this stage, and for the purpose of this article, waves and other factors which are ‘dynamic’ in nature (i.e., which cause time-varying forces on the ship) are not considered, and the analysis is limited to a ‘static’ analysis.

The force coefficients provided in MEG-4 follow a specific sign-convention as per the figure below:

The coefficients can be obtained from the charts and tables provided in Appendix A of OCIMF MEG-4. 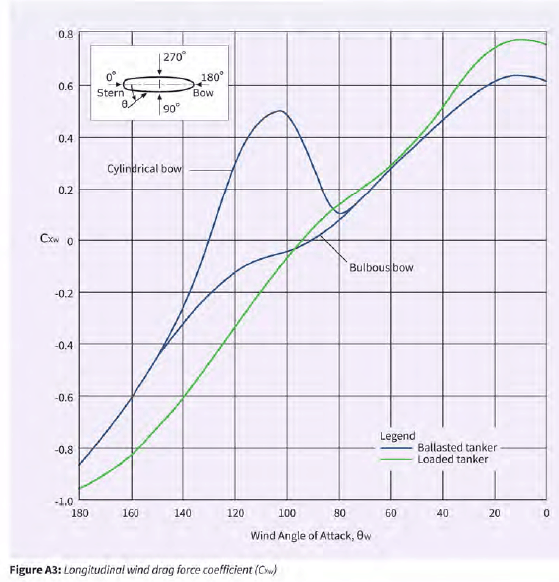 Next, we calculate, for all cases listed in Step 1, the environmental forces of wind and current (forces and moments).

The forces are obtained from the coefficients by using the standard formulae:

Once we have the environmental forces, the next step is to design/select the mooring equipment based on the forces obtained.

Mooring equipment can be the following:

Each mooring equipment is specified by its Safe Working Load (SWL), which is what we need to determine.

OCIMF provides a simple approach to calculating the SWL once environmental forces are calculated.

In Part 2, we’ll look into what is Ship’s Design MBL, and also how the mooring pattern for the vessel can be designed.

The views, information, or opinions expressed in this article are solely those of the author and do not necessarily represent those of TheNavalArch Pte Ltd and its employees