Cargo Stoppers – why they are critical and how to design them 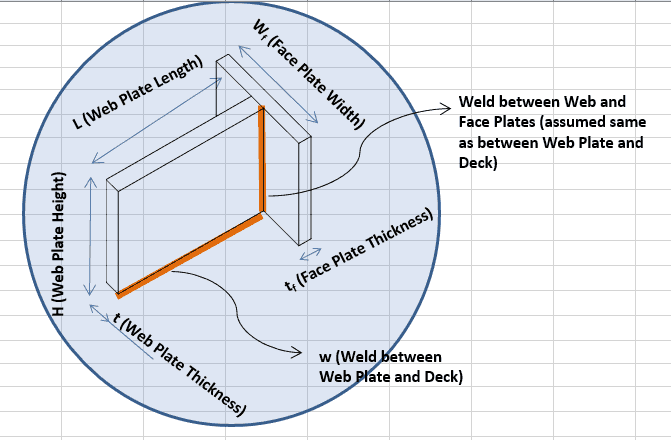 Stoppers and their critical role in seafastening of cargo 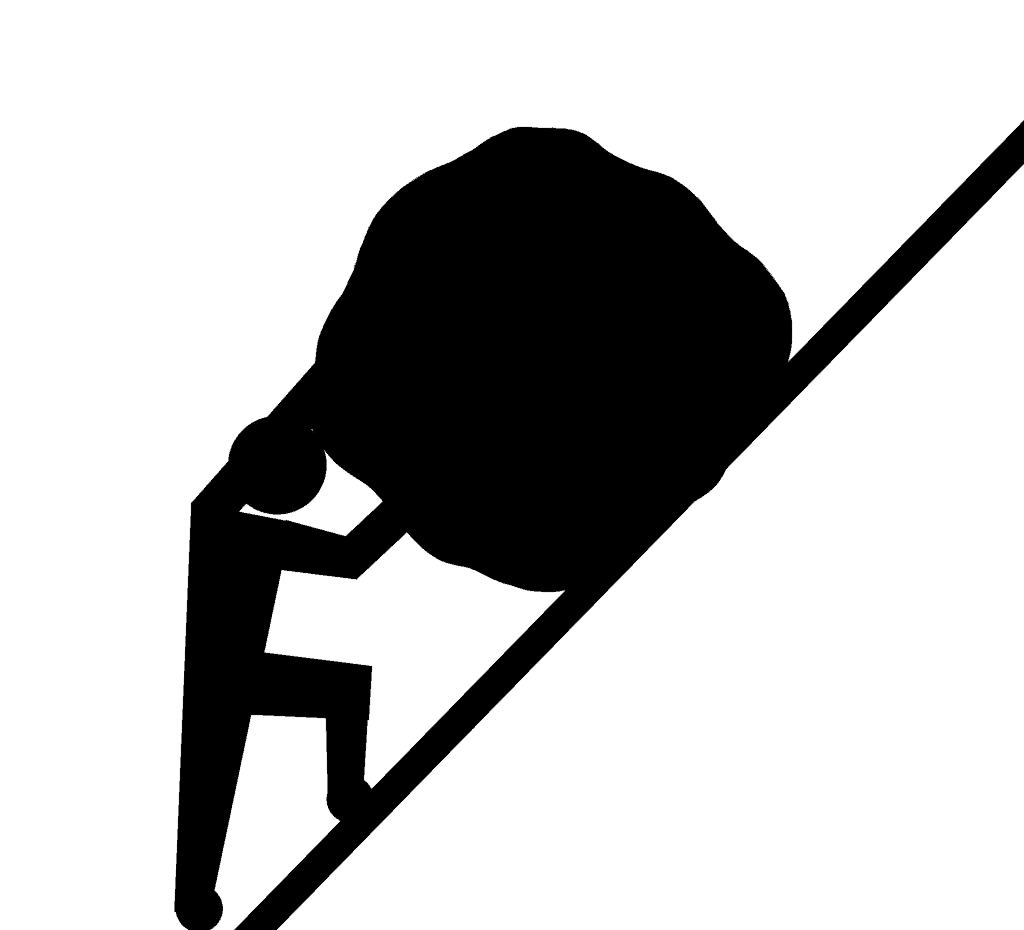 A cargo transported on the deck of a ship is subject to many forces. These forces comprise of the inertial forces due to the ship motions – the three translations and three rotations – and the environmental force of wind.

Due to the combined effect of these forces, the cargo, if left unfastened on the deck of the vessel may not remain static at one location but may move around. To avoid this, it is critical that the cargo is restrained from movement. The design of all accessories to restrain the cargo is called Seafastening design.

A typical and simplest seafastening may comprise of lashing ropes (or wires) fastened to pad-eyes welded on deck of the vessel. However, for some heavy cargoes this may not be enough, and additional arrangements may be required for preventing both translational and rotational motion of the cargo on deck.

A Stopper is a simple structure which is welded to the deck of the vessel to prevent the cargo from sliding (i.e., the translational motion).

The very simplest stopper which can be imagined is simply a metal plate which is welded to the deck, and against which the cargo rests. The below figure should be able to provide a starting point. 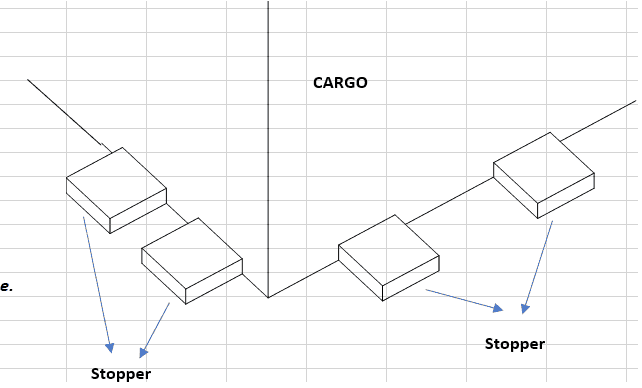 The simplest stopper comprising of a steel bar

Stoppers can be of many types. The choice of the right stopper depends on the geometry of the cargo, on the weight distribution of the cargo and on forces experienced by the cargo during the voyage. Stoppers can range from simple plate bars to complex H-beams (called Stanchions on ships).

Some of them are shown below: 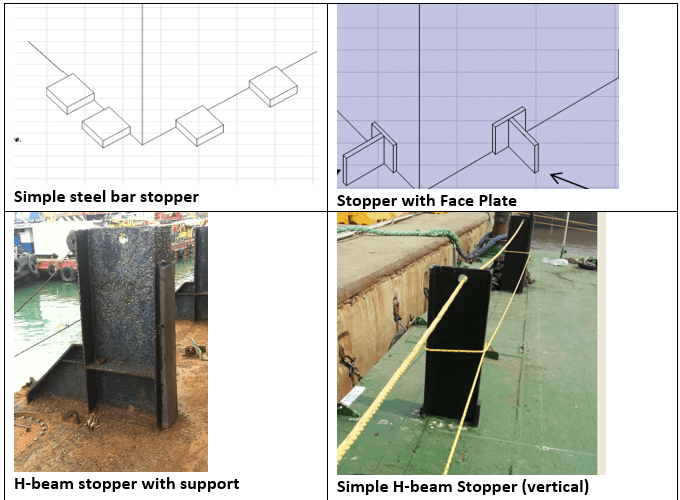 For example, the H-beam stoppers (also called stanchions) are mostly used for restraining pipes being transported. A box shaped cargo with most weight near its base will use a flat plate stopper (with or without face plate). 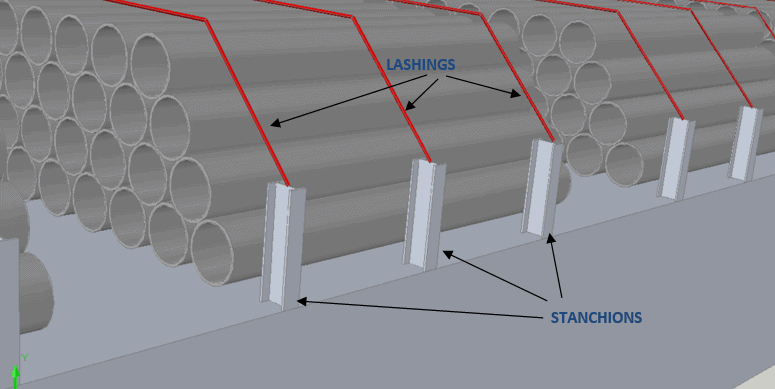 The height of the stopper will depend upon the height where the cargo needs to be supported. For example, in the above pic showing stoppers for pipe transport, the stanchions need to be of a height more than the diameter of the pipe to secure the whole pipe bay adequately. Similarly, box shaped cargo like containers may find the simple steel bar stopper (or one with face plate) enough for restraining.

Structural Design of a Stopper

Whatever the shape and type of stopper selected, it should be structurally sound to perform its job – preventing the sliding of cargo, i.e., it should be able to overcome the forces which make the cargo slide. What are these forces?

he two forces which may lead to cargo sliding are:

The figure below demonstrates the two sliding forces.

To understand the structural design of a Stopper, let’s take an example of a box shaped cargo being restrained by a flat steel stopper with a face plate. 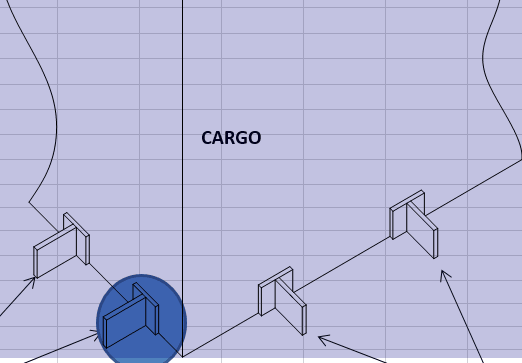 Stopper with a Face Plate

This kind of stopper has two components – a web plate and a face plate which are welded to each other. The face plate is what the cargo rests against, while the web plate is welded to the deck of ship. The details of the weld and configuration of the plate can be seen in the figures above.

Since the vessel experiences forces both in longitudinal and transverse directions, stoppers need to be installed on both longitudinal and transverse faces of the cargo. Taking a simple box shaped cargo as an example, a typical plan showing the stoppers is shown below. We can see that three stoppers on each side (Port/Stbd) are restraining the total Transverse force (FT), while two stoppers on each side (Fwd/Aft) are restraining the Longitudinal force (FL). The forces can be obtained from a motions analysis of the vessel, or using some empirical formulae (check out our products for calculating accelerations) 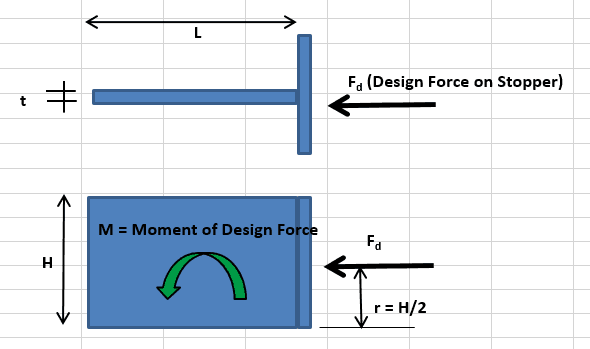 Thus, we need to analyze the web plate for:

Since the weld is what affixes the web plate to the deck, the stresses in the weld are equally important to be evaluated.

Usually the weld type for welding the web to the deck is a fillet weld (two-sided). The weld profile for the stopper with face plate is shown below: 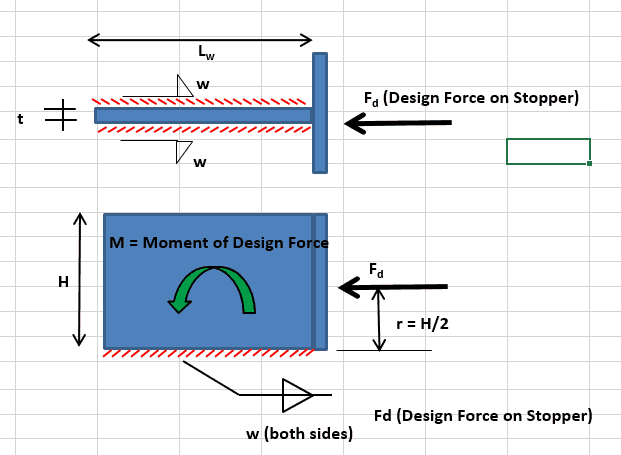 The force Fd and the resulting moment M are transmitted to the weld which is analyzed for:

With the above two types of checks (web plate strength check and weld strength check) performed, the stopper’s structural design is considered enough.

Similar principles can be applied to the design of other types of stoppers (H-beam stoppers or Stanchions).

To wrap up, stoppers are small structural items but play a vital role in retraining cargo during transport. Thus, their design should be done with due diligence and care to ensure a successful marine operation.

Please do check out our related products below:

The author is the founder of www.thenavalarch.com, a website which aims to bring the marine and oil & gas industries to the internet through rich in quality but low in cost online content like useful calculators, video tutorials and articles. A graduate in Naval Architecture from Indian Institute of Technology (IIT), Kharagpur, he has more than 15 years of work experience in Singapore and India working with industry leaders like Mcdermott and Bumi Armada on the design, engineering, construction and installation of a variety of marine and offshore structures, ranging from ships to offshore platforms and FPSO’s. He also had the honor to serve as the Vice President of Society of Naval Architects and Marine Engineers Singapore from 2015-2017.

TheNavalArch is his endeavor to create a platform which brings out the knowledge currently lying with industry experts and places it on the web for everyone to benefit from. He’s constantly looking for collaborators who are interested in creating rich content and contributing to the growth of this platform and to the industry at large. Interested experts can contact him at info@thenavalarch.com