Hydrogen as an alternative fuel for ships to reduce emissions 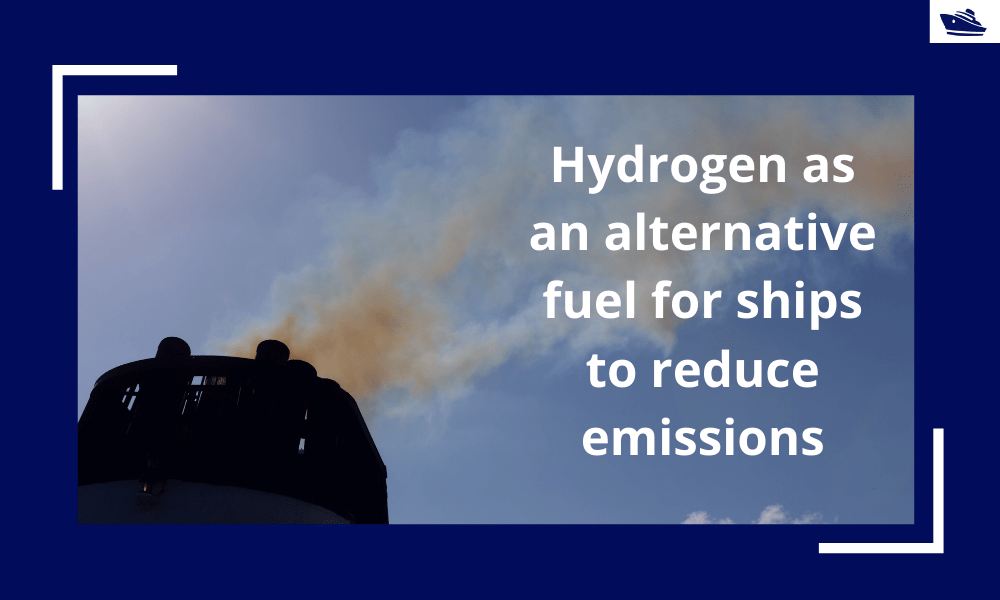 ,This article first appeared in the Feb 2019 edition of Marine Engineers Review. It is being reproduced with minor edits here for the readers of TheNavalArch’s blog.

The world is on facing a grave environmental challenge with an increase in carbon emission and melting polar ice caps, with the average temperature rise predicted to be around 7°C by 2100. As mankind is driving towards the future, more importance is being given to green practices with changing government policies.

The maritime sector has also developed various regulations and conventions to lower the emissions and a new concept of “Zero Emissions”, was derived.

Recent trends in shipping show a huge inclination towards stripping-off emissions to the lowest values possible. We know that the standard fuel cycles are not much efficient even with the various improvisations made over. Fuel cells have proven to be efficient power sources over the last decade with maximum efficiency up to 82% which is almost twice the standard engine cycles. There have been sincere efforts by automobile industries with hybrid vehicles coming into the picture, now it is time for hybrid vessels too.

Vessels can be run using hydrogen power plants with an effective analysis of the total outcomes of using hydrogen as a fuel in terms of profits to the owner and also to the environment. The economic viability of any change is the most important consideration in the industry, inherent with the need for all standards and conventions to be abided by with the least additional equipment onboard.

Hydrogen as a fuel:

Some research shows that the maximum conversion efficiency of fuel cells is limited to the Carnot efficiency. The theoretical efficiency of the fuel cell may exceed that of the Carnot cycle for the same temperature range. The lowest value of maximum efficiency is found to be 79.3, 75.7, 82.1 % of hydrogen-oxygen, hydrogen-air, methane-air fuel cells respectively. By increasing the stoichiometric coefficient of air, the efficiencies of both hydrogen-air and methane-air fuel cells monotonically increase and they approach 100 % limit at a stoichiometric coefficient of 7.2 and 9.8 respectively.

A fuel cell system running on hydrogen can be compact and light­weight and have no major moving parts. Because fuel cells have no moving parts and do not involve combustion in ideal conditions they can achieve 99.999% reliability.

There are many types of fuel cells so the efficiencies vary, but most are between 40-60% energy efficient. However, if the excess vapor produced in the fuel cell is used up the efficiency can rise up to 85%. Significantly more than that of the coal-fired power plants that are only 1/3 times efficient. Assuming production at scale fuel cells can save up to 20 – 40 % on energy costs when used in cogeneration systems. A fuel cell power plant running or hydrogen as a source would produce 1 ounce of pollution (other than CO2) for every 1000kWh of energy. Fuel cells also produce 97% less nitrogen oxide emissions compared to coal-fired power plants. A solitary such program is operating in Stuart Island in Washington state. Solar panels power an electrolyzer, which makes hydrogen. The hydrogen is stored at 500 US gallon (1900L) tanks at 200 PSI and runs a Relion fuel cell to provide full electric backup to the off-grid residence. 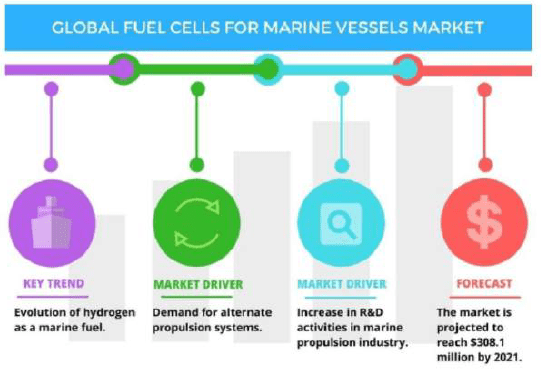 Production of hydrogen on a large scale:

There are 6 different methods of production of hydrogen on a large scale.

Requirements for powering ships with hydrogen:

The electric propulsion system would look like below. The electricity produced from the fuel cell generator would be used to drive the propellers. Output equivalent to a 2 stroke diesel engine can be achieved.

In recent conditions, the cost of production. manufacture and dispensing of hydrogen is comparatively much higher when compared to that of fossil fuels. But, what if the hydrogen needed to run the fuel cells is produced onboard itself?

Yes, there is a process to break water into its principal components with the use of sunlight. This photo-electrochemical method is still in the R&D stage. Once we are able to produce hydrogen on a large scale on board there is no need for fueling stations plus in addition, there would be a large cut own in the fuel costs which would benefit the shipowners a lot. All the ship needs are sufficient water onboard & sunlight to run. The vessels in the future will become self-sufficient. 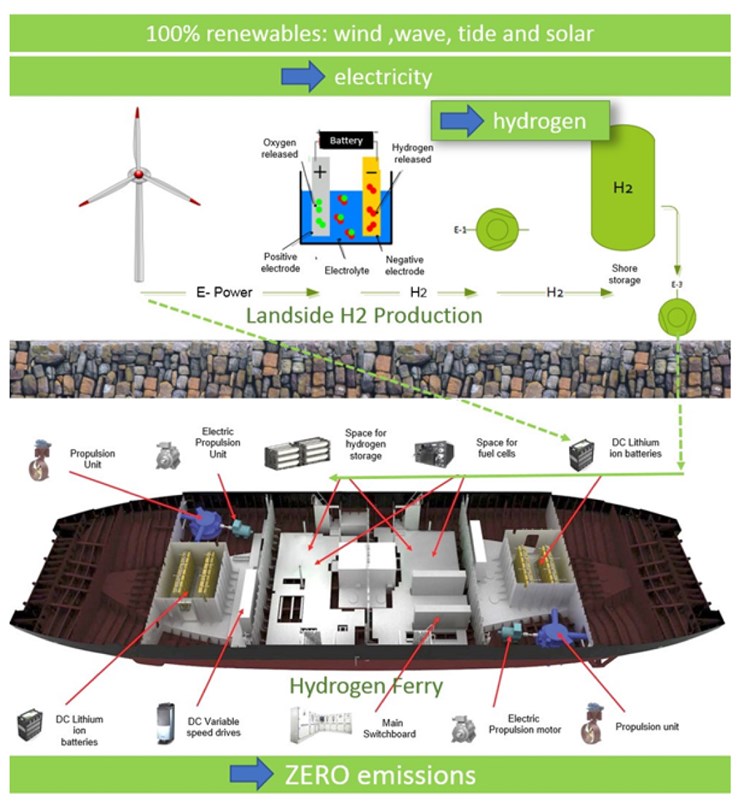 Hydrogen fuel cells have a long track record of supplying efficient, clean power for a wide range of applications, including forklifts, emergency backup systems. and vehicles. An analysis by Sandia and DOE showed that due to fluctuating toads in maritime auxiliary power applications, a hydrogen fuel cell, which follows the load, is more energy-efficient than a diesel engine. A hydrogen fuel cell only supplies power when it is needed.

Hydrogenics Corp. designed and manufactured a containerized 100-kilowatt hydrogen fuel cell unit. which includes the fuel cell engine, a hydrogen storage system, and power-conversion equipment. Built into a standard shipping container, the unit has an outward appearance and functionality similar to maritime diesel generators that are currently in use.

Major commercial ports can produce daily emissions equal to those of half a million cars or more. To combat these environmental impacts, many US ports have begun to adopt green practices. Hydrogen fuel cells have the potential to meet the electrical demands of vessels in ports, as well as supply power for other port uses, such as yard trucks, forklifts, and other material-handling specialty equipment. If implemented, hydrogen fuel cells, which produce zero pollutant emissions and no greenhouse gases at the point of use, can reduce the overall amount of diesel or other maritime fuel used.

The major concern regarding hydrogen run ships is their economic viability. With the research and developments in the production of hydrogen, the costs can become considerably low in the future. However, there may be a long way till they become equivalent to or cheaper than gasoline or HFO.

Considering the life cycle benefits of the vessels with such systems onboard, the return on investment can be guaranteed, but the shipowner must have the willingness to invest in such a high capital cost project. The storage cost of hydrogen above the ground is also a major challenge to overcome.

In the current conditions, a lot of improvements are needed but soon with such a rate of technological progress. in the upcoming decade, a project with hydrogen as fuel can be suitably viable.

Part 1: About Hydrogen – Basics, Opportunities, and Challenges Of late, hydrogen has been generating quite a buzz in the energy sector with its possibility as a clean source of energy. The shipping sector is not untouched, and this article explores the possibilities...

Introduction   Marine transport is the backbone of the global trade and reasonably can be considered to be the artery of the global manufacturing supply chain, as more than four fifths of the world merchandise trade by volume is carried by sea. Undoubtfully, the... 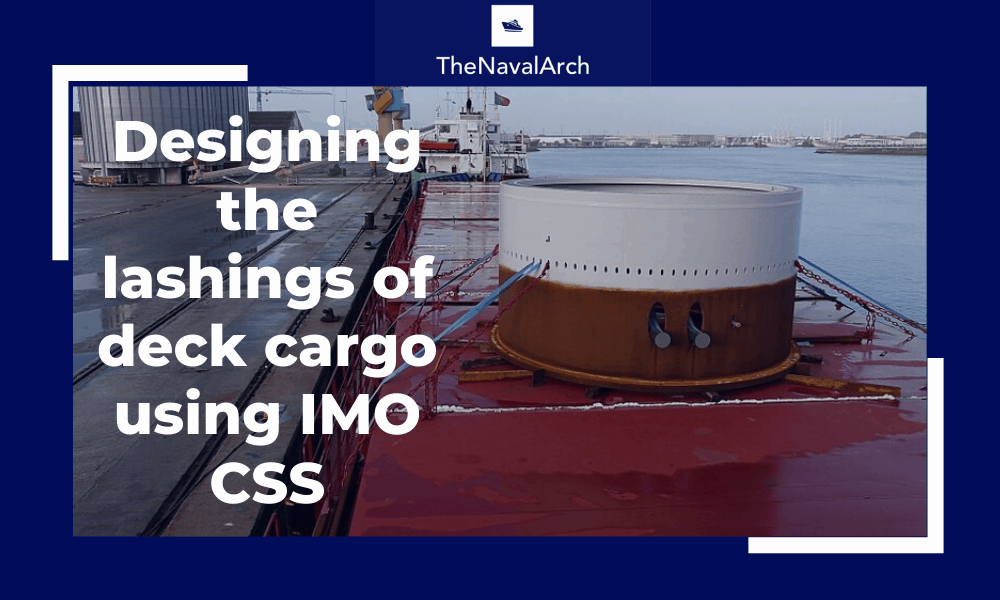 Introduction More than 70% of the earth is covered by water, which makes shipping historically the easiest and cheapest way of connecting manufactures and customers across the globe and can be reasonably considered to be the artery of the global economy....