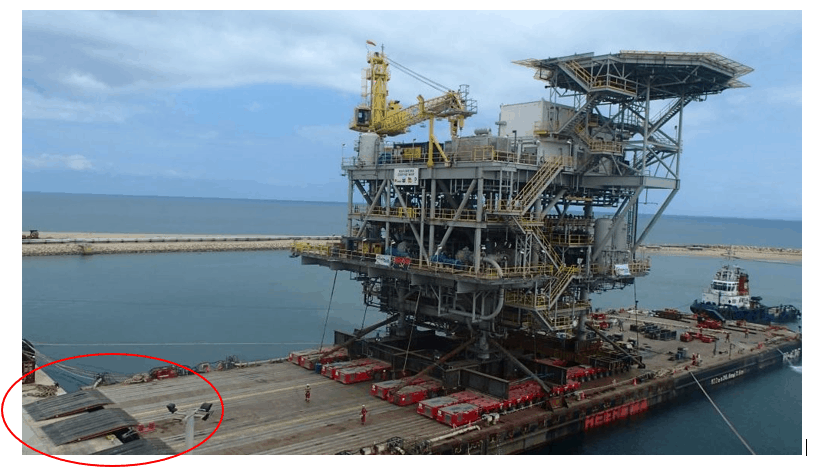 Loadouts are a complicated exercise and require intricate engineering calculations to ensure success of the operation. Right from selecting the suitable vessel with adequate ballasting capability, to performing ballasting and stability calculations, selection of the loadout method (skidded/SMPT/lifted) down to the selection of the loadout ramp, each activity carries an equal significance. In this article, we’ll discuss the significance, and design aspects of loadout ramps. Loadout ramps are structures which are used to cover the gap between the quayside and the vessel (for skidded/SPMT loadouts). The cargo is transferred from Quay to Vessel as it is skidded over the Ramp or when a SMPT trailer carrying the cargo moves over the ramp. We can sense that during the loadout operation, the ramp must stay horizontal to avoid any unwanted scenarios of the load tilting or the vessel suffering from strength issues. This is ensured by a carefully monitored ballasting operation which keeps the vessel on even keel and level with the quay even during tidal variations. The picture below depicts a loadout operation using a SPMT trailer. We can see the ramps at the left-hand bottom corner of the picture.

These ramps appear to be rectangular, but wedge shaped. We can also notice that there are four files of SPMT trailers and there is one ramp placed for each file (only two ramps are fully visible, while the third is partially visible). Looking at these ramps and imagining the SPMT going over the ramp, we can gauge the kind and distribution of forces the Ramp will be undertaking during the operation. The Ramp should be analyzed for all such scenarios in which different configuration of wheels can be conceived. The simplest ramp – the flat plate The simplest form of ramp can be just a rectangular flat plate over which the SMPT trailer passes. The figure below depicts the scenario in which an axle of the SPMT is at the center of the ramp. The ramp will have to be analyzed for its strength for this load case. There can be another case in which there are two wheels on the ramp, and so on. Strength check needs to be done for all these cases.

Example calculations To demonstrate the different load scenarios, lets take an example of a scenario of loadout with the following parameters: The distance between two axle lines is 1600 mm, which is less than the gap length. Also, if we divide the gap length by axle distance, the result is less than 2. Thus, there will be two loading cases: Case 1 is depicted below. We can see that the wheel has moved 1600 mm from the side of the gap, and the next wheel is just about to leave the quay side. The resulting shear force and bending moment calculations/graph are also shown. 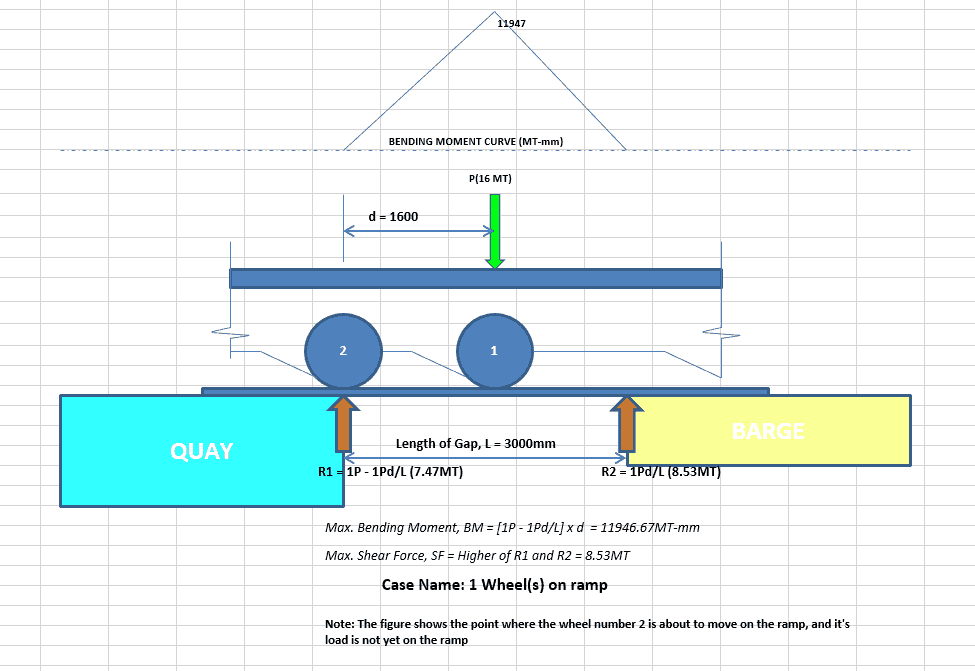 Case 2 is also depicted below. We can see that now there are two wheels equidistant from each end of the gap. Each wheel carries a load of 16 MT, and the resulting bending moment and shear force curves are also shown. 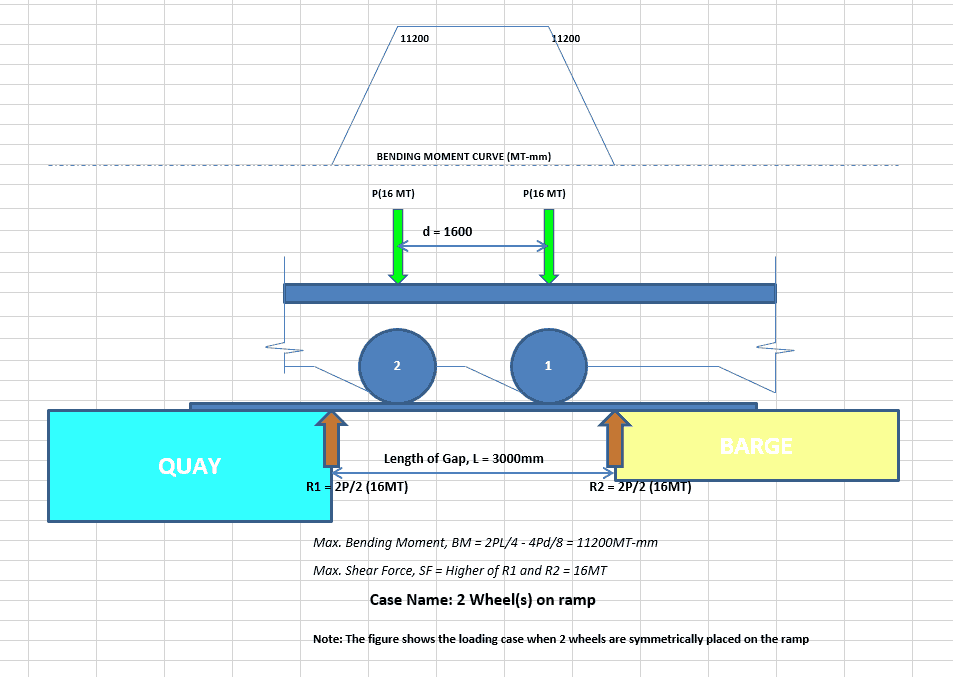 We can see that in this case, there can’t be three wheels on the ramp, since there is not enough gap length to accommodate three wheels. The above methodology can be employed to design and deploy a simple rectangular flat plate as a link plate/ramp for a loadout operation. TheNavalArch has its own simple spreadsheet to design/evaluate rectangular flat plate ramps for loadouts. It automatically generates and evaluates the load cases in excel after the user provides the basic inputs like gap length, axle spacing, plate dimensions, load etc. You can check it out from the link below.

Disclaimer: The views, information, or opinions expressed during [the] series are solely those of the author and do not necessarily represent those of Thenavalarch Pte Ltd and its employees