Designing a simple 4-point lashing system for a Deck Cargo

Lashing of a deck cargo on a ship involves different means and mechanisms to secure the cargo to the deck of the ship. This ‘securing’ is important to contain the movement of the cargo in view of the ship motions during the transportation.

The simplest ‘system’ which comes to the mind is to take a few ropes and tie one end of each rope to some point on the cargo, and tie the other end to some point on the ship’s deck. The ropes can be evenly distributed so that the securing in all the directions is ensured.

In this article we’ll discuss the basics of cargo lashing and will also take a look at a simple 4-point lashing system design for a rectangular shaped cargo.

Designing the right lashing for a cargo depends on multiple factors

A Cargo in the sea will experience forces of surge and sway in the longitudinal and transverse directions, and heave in the vertical direction.

Since there are restraints to be provided in four directions, we can imagine a simple system consisting of four lashings are shown in figure below:

We can infer from the above figure that

How much of a load a particular line will be able to take up in a given lashing configuration depends purely on the location of the line, its length and the angles it makes relative to the vertical and horizontal planes.

The basic outline of the whole method is:

We take an example of the transverse sliding force on the port side. 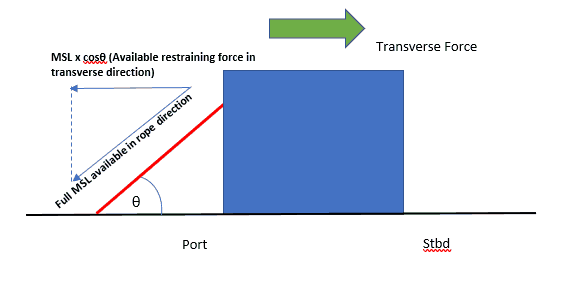 Available restraining force from a lashing

The cargo is also prone to tipping at the edges. To demonstrate sufficient restraint against tipping, the levers of the lashing forces are also taken into account and it is to be demonstrated that the total restraining torque available from the lashings is more than the total tipping moment caused by external forces. The self-weight of the Cargo also provides restraining torque against tipping. Generally, tipping is critical only in the transverse direction if the cargo is oriented longitudinally. The figure below demonstrates this

Following the above method based on IMO CSS, we can design a simple four-point lashing system for simple cargoes. For any failure in the lashings, the design parameters and/or lashing sizes can be changed to arrive at a design which is adequate.

TheNavalArch has its own app for 4-point lashing design based on IMO CSS. Do check it out here: