Sea pressure loads are an important factor in the structural design of a vessel. What is sea pressure load? As the term suggests, it is the external pressure on the vessel due to the surrounding sea. What kind of pressure it is, and how to calculate it?

If we imagine a body floating in calm water, the water exerts pressure on it, and the water pressure increases with the body going deeper in water. This pressure is called hydrostatic pressure, and its distribution is something like shown in the figure below:

Thus, the structural elements of the vessel need to be assessed for these structural and fatigue loads due to the dynamic forces. In this article, we will examine the derivation of dynamic sea loads based on DNV Rules for Classification of Ships, Part 3 Hull, Ch 4 Loads, Section 5.1.

Two major types of assessments are covered in DNV Rules – first is the Strength Assessment of the vessel, and the second is Fatigue assessment. For each of them, the design load scenarios are different.

During its lifetime, the vessel may experience different kinds of load scenarios. It experiences different loads when it is in a harbor or at a sheltered location than when it is out in the open sea. Similarly, circumstances like ballast water exchange or tank testing/overfilling of tanks impose different kinds of loads on the tanks. DNV Rules capture these design load scenarios by laying out what kind of loads are applicable to each of these scenarios. Again, two types of loads are listed:

A snapshot of the DNV load scenarios for the Strength assessment is shown below: 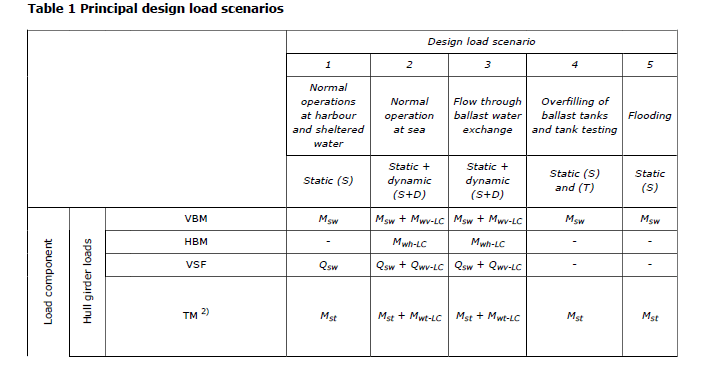 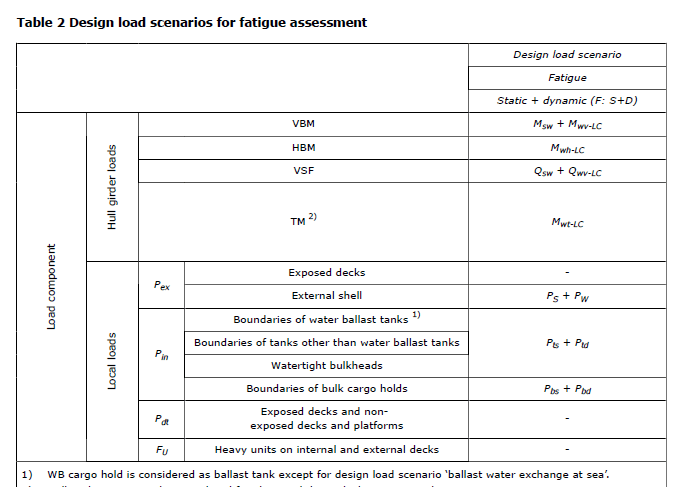 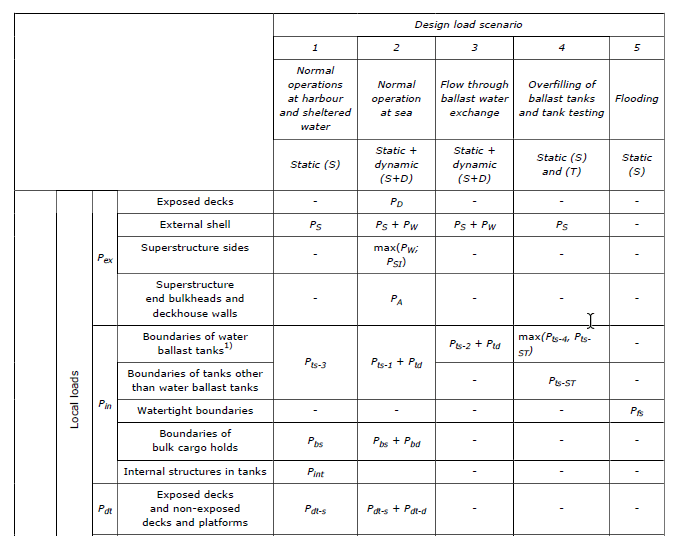 The sea is comprised of a spectrum of waves. The analysis using full-blown spectra is complicated and time-consuming. The equivalent design wave concept replaces the spectra by a single wave of such height/wavelength which will lead to the same long-term results. EDWs are used to generate dynamic load cases for structural and fatigue assessments. DNV provides the details of the EDWs needed as per the table below: 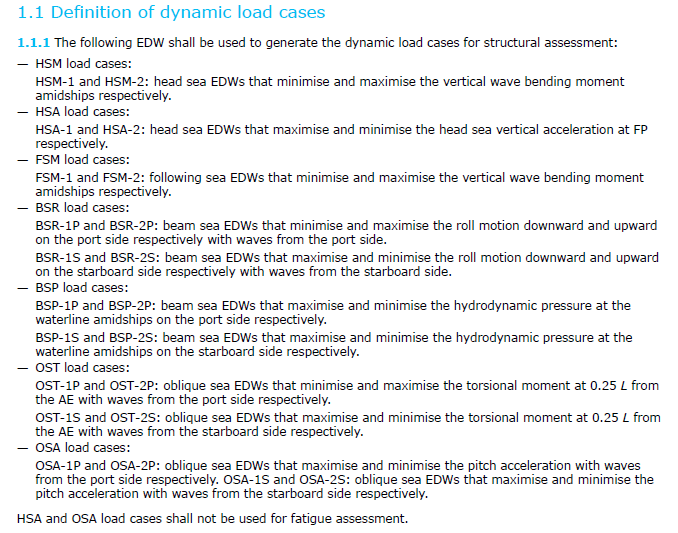 DNV Rules define the empirical formula for calculating the total pressure at any point of the vessel for either only static load scenario or static + dynamic load scenario. The total pressure is defined as a sum of hydrostatic pressure PS and wave pressure PW. Hydrostatic pressure can be simply calculated as ρg*(vertical distance of the point, z, from the waterline, TLC). However dynamic pressure is calculated differently for each dynamic load case as discussed earlier. Several coefficients are included in the calculations to capture effects like non-linearity, wavelength, amplitude, phase, girth distribution, etc. Similar approaches are used both for strength assessment and fatigue assessment.

The scenario-based calculations provided by these rules present a consistent way of calculating loads on a vessel that cover the appropriate mode of operation of the vessel. The dynamic load cases are based on an Equivalent Design Wave (EDW) concept that defines the loads equivalent for a long-term response. Thus, the rule-based calculations increase the durability of the hull structure, reduce the risks of major structural failure and ensure the safety of life, environment, and property.