In the early design stages, with limited data available, empirical methods can be used to give a fair estimate of a ship’s resistance.

In this article, we will discuss in detail an empirical method called the Holtrop-Mennen method, which is commonly used for ship-shaped vessels. This method was developed after performing regression analyses of random model experiments and full-scale data. The first publication of the method was in 1978 (See Ref 1), and it was further refined in 1982 to include some unconventional combinations of the main parameters of the vessel.

The method is limited to conventional ship-shaped vessels and is not to be applied for planning/semi-planing or high-speed crafts.

Components of a ship’s resistance and their estimation

The total resistance of the ship is subdivided into many components (see Ref 2):

We’ll now take them up one-by-one and describe the empirical methods for each.

The resistance coefficient is a function of the speed of the fluid and its viscosity. It is derived from the ITTC 1957 formula

Here, Rn is the Reynolds’ number of the fluid, which is calculated according to the formula below:

Where, V = relative speed of the vessel against water (includes current speed)

L = Length of vessel on waterline

The above formula for CF was adopted by the International Towing Tank Conference (ITTC) in 1957 at Madrid.

V = relative speed of water vs the hull

As per Holtrop-Mennen formulation, the form factor ‘k1’ is obtained from the formula below:

This involves calculations of multiple parameters like prismatic coefficient, length of run, and coefficient for stern shape which can be obtained from the geometric particulars of the vessel in question.

The wetted area of the hull can be calculated from the empirical formula below:

The vessel may have multiple appendages to the hull. These may include – Rudder, Shafts, Shaft brackets, skeg, strut bossings, hull bossings, stabilizer fins, bilge keels etc. In a similar manner to the hull resistance, the resistance of the appendages of the vessel can be found out from a similar formula

The term 1/2 ρwater(ΣSAPP) V2 is the pressure on the entire surface area of all appendages. ΣSAPP = Total Wetted Surface Area of all Appendages. V = Vessel Fwd Speed (including current speed). ρwater = Density of Water

The factor (1 + k2)eq is the appendage resistance factor (similar to the hull’s form factor) and is an area-weighted average of the factors for different appendages. 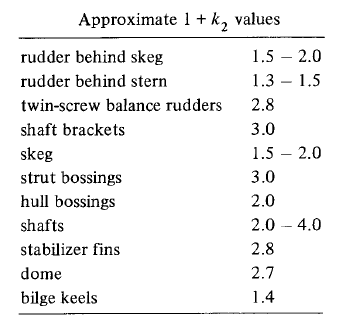 A simple table for calculating (1 + k2)eq can be created as below: 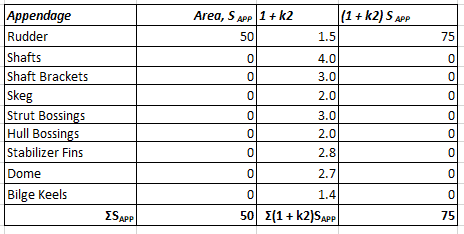 When a completely submerged body moves in a non-viscous fluid, then the net force on the body (due to pressure normal to the surface of the body) is zero. This is because the pressures on the aft and forward halves cancel each other.

However, when the body moves with part of it above water, it creates waves which alter the pressure distribution around the hull and cause a net fore-and-aft force (see Ref [2]). This is called the wave making resistance, i.e., the force expended by the ship to maintain the wave system it creates at the free surface.

In the Holtrop-Mennen method for resistance estimation, the following formulae are used for calculation of Wave Resistance:

We can see above that the presence of a bulb (ABT is the bulb transverse area) leads to a reduction in the wave resistance by leading to a lower value of factor c2.

This is an additional resistance component due to the emergence of the bow above the water surface.

In the Holtrop-Mennen method, it is calculated using the following empirical formula:

We can see that the formula depends on the emergence of the bow above water (calculated from draft, height of bow and transverse area of bow).

Additional pressure resistance of due to transom immersion (RTR)

Similar to the bow emergence leading to additional resistance, a vessel with Transom stern also experiences additional pressure resistance when the transom immerses in water.

The below empirical relation is used in Holtrop-Mennen method to calculate this component of resistance. We can see that the formula depends on the area of the immersed transom.

The model-ship correlation resistance is added to account for the effect of hull roughness, which in turn, is attributed to a number of factors:

To account for the above, a correlation allowance is introduced, which is given by the formulation as below (in Holtrop-Mennen):

That brings us to the end of this discussion on using Holtrop-Mennen method for prediction of resistance of ship-shaped vessels. Please note that this method should be used only in early design phases, and is not to be relied upon for accuracy. For more firm predictions, it is recommended that a full-fledged resistance estimation be performed using a CFD analysis or a model test.

TheNavalArch has developed its own calculator for estimating the resistance of a ship as per Holtrop-Mennen method. Please do take a moment to look at it below.