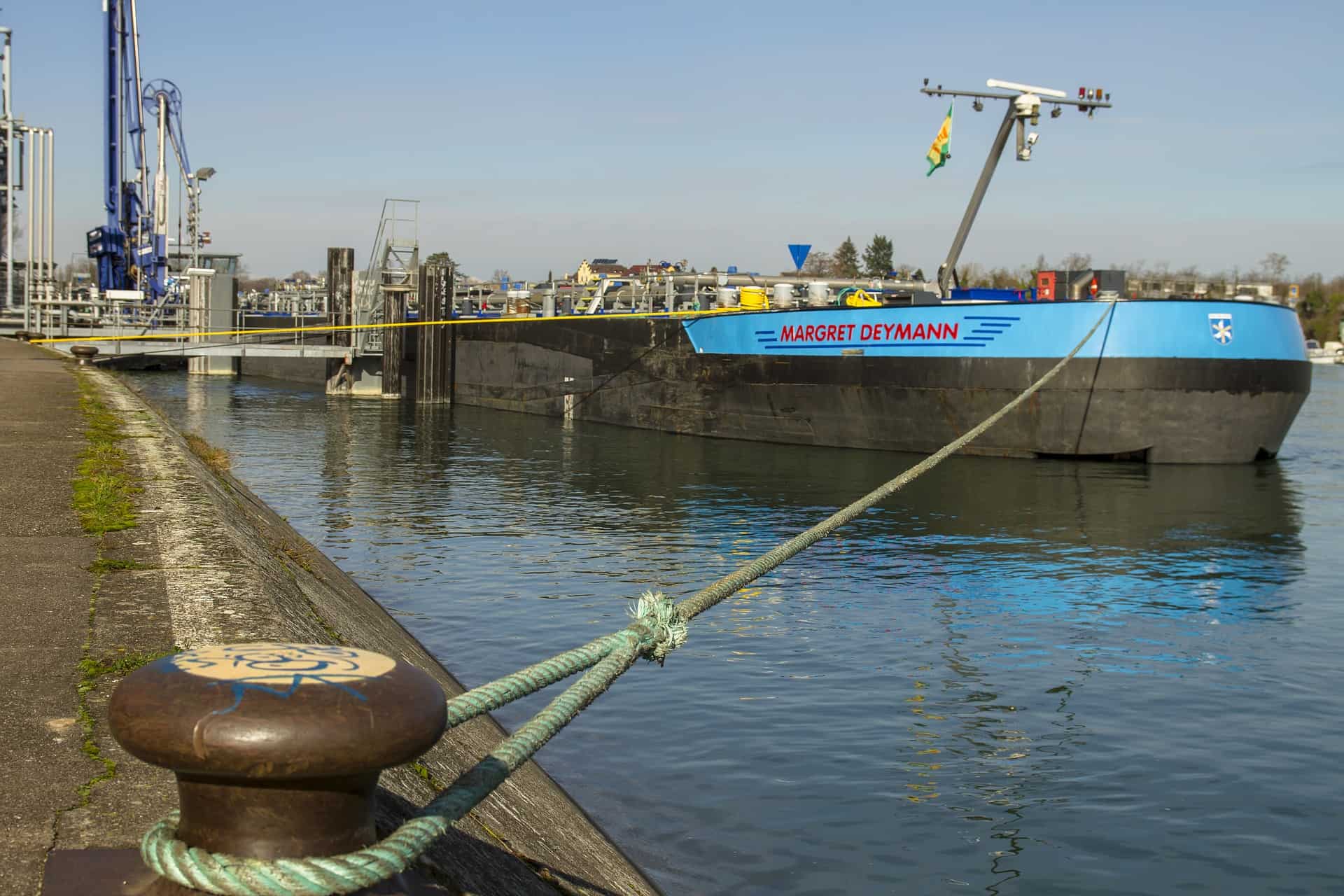 In Part 1 of this article, we saw a step by step guide to calculate the Environmental forces on a vessel based on “Standard” environmental criteria defined in Section 3 of OCIMF Mooring Equipment Guidelines Fourth Edition (MEG-4) in order to determine the ship’s design MBL which in turn can be used to size the various components of the vessel’s mooring system, like bollards, fairleads and winches. Various parameters like loading conditions, tidal variations, WD/T ratio etc. were discussed and calculation of wind and current forces on the vessel based on coefficients was presented.

The vessel mooring pattern is to be designed to effectively counter the environmental forces from any direction. This means that the lines should be able to cope horizontal as well as transverse loads. The mooring pattern should therefore have lines along longitudinal direction to prevent motion in forward and aft directions and also in the transverse direction to prevent motion away from the berth. The longitudinal lines are knows as spring lines and the transverse lines are known as breast lines. The pattern also depends on the provisions at the terminal and it should be chosen, as much as possible, to keep the spring lines parallel and breast lines perpendicular to the ship length. 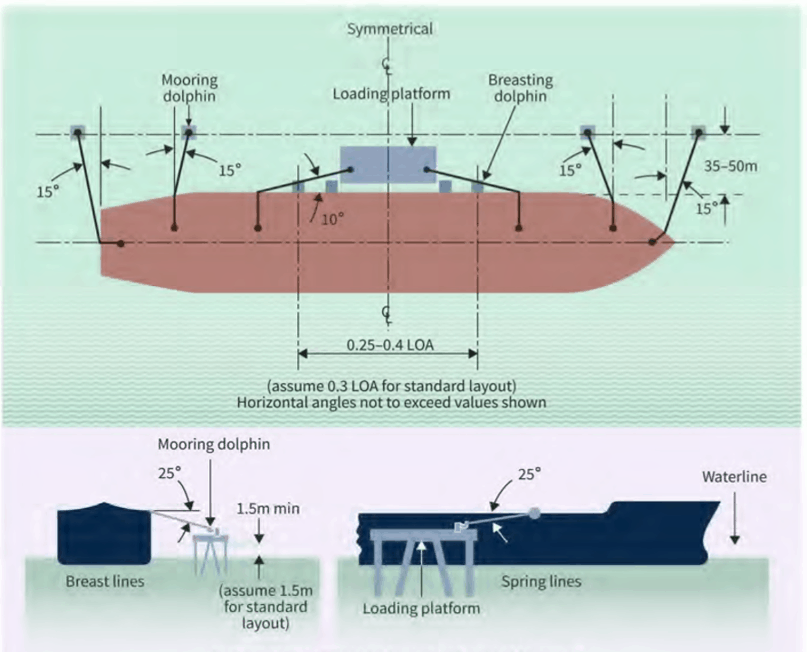 MEG4 provides the below guidelines for a generic mooring line layout.

A vessel subject to environmental forces/moments will move in the forward or transverse directions or rotate about the vertical axis i.e. the vessel will have surge, sway or yaw respectively. The vessel motion will change the relative distance of the fairlead from the shore anchor point, changing the length of the mooring lines. The lines, generally speaking, behave like a spring and the force exerted is proportional to the change in length of the line. This characteristic of the lines can be found from the data sheet of the line from the manufacturer. The change in length of the lines increases the tensions in the lines and the combined load exerted by all the lines then balances the total environmental loading. This condition of the vessel where the environmental loading is balanced by the mooring lines is known as static equilibrium.

A simple spring formulation can be applied to evaluate the translations/rotations of the vessel in static equilibrium under the effect of the calculated environmental loads. Once a mooring system for the vessel at the berth has been chosen, for given position of the vessel the change in length of each mooring line with respect to its initial (un-stretched) length can be calculated using a simple spring formulation F = k δL where F is the line tension, k is the stiffness of the line and δL is the change in line length. Tension in each line can be aggregated to get the net loading on the vessel.

Hence we can calculate the translation/rotation of the vessel that will result in unit force/moment on the vessel by the mooring lines. Let’s call this the inverse stiffness k’. If k’ is displacement produced by unit force on the vessel, the total displacement X produced by the net environmental loading F can be calculated as X = F k’. The new position for the ship can be used to re-calculate the net mooring loads on the vessel and compared to the environmental forces and the whole process can be repeated until static equilibrium is achieved. The total length of the mooring line from winch to bollard should be used in the calculations. Also the stiffness of the lines change with use and the calculations should use the stiffness of used lines instead of new lines. The above can be summarized in below steps,

Once static equilibrium is achieved, maximum mooring restraint force can be determined and used in the flowchart below, provided by MEG4, to calculate the ship design Minimum Breaking Load i.e. Ship design MBL. With the vessel in static equilibrium, the tensions in each mooring line can be determined. Since there are several components in the mooring pattern that support multiple mooring lines, the total loading on such component can be used to calculate the Ship design MBL as

It must be noted that static analysis may only be suitable for benign environment as we are assuming the lines as simple springs. In other cases dynamic analysis for the vessel motions and line tensions should be performed.

The steps above are also lined out in OCIF MEG-4, and shown in the figure below. 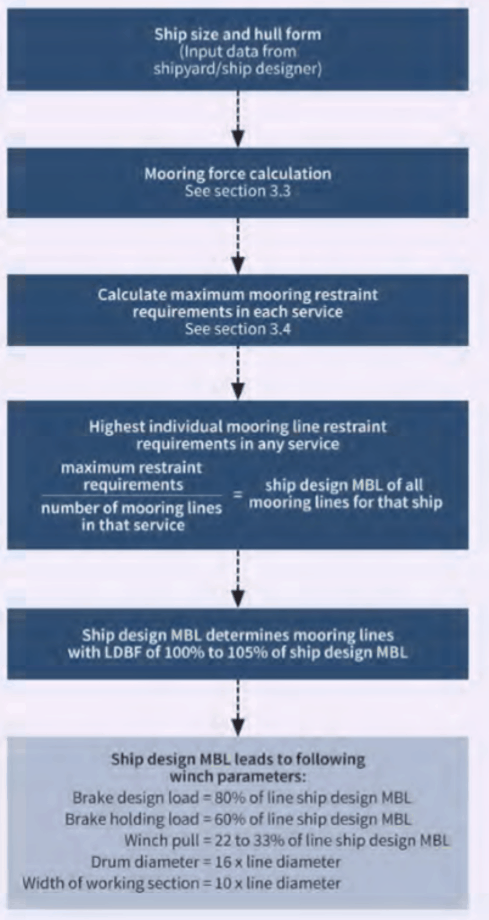 In Part 3, we will further look into using this Ship design MBL for line selection and to determine D/d ratio (bend dia/rope dia) of mooring line and other parameters.

Do check out some products relevant to OCIMF MEG-4 below. The product for calculation of Ship’s Design MBL is in progress and shall be out soon!

Disclaimer: This post is not meant to be an authoritative writing on the topic presented. TheNavalArch bears no responsibility for the accuracy of this article, or for any incidents/losses arising due to the use of the information in this article in any operation. It is recommended to seek professional advice before executing any activity which draws on information mentioned in this post. All the figures, drawings and pictures are property of thenavalarch except where indicated, and may not be copied or distributed without permission.