Equipment Numeral Calculation for a Ship – a Guide 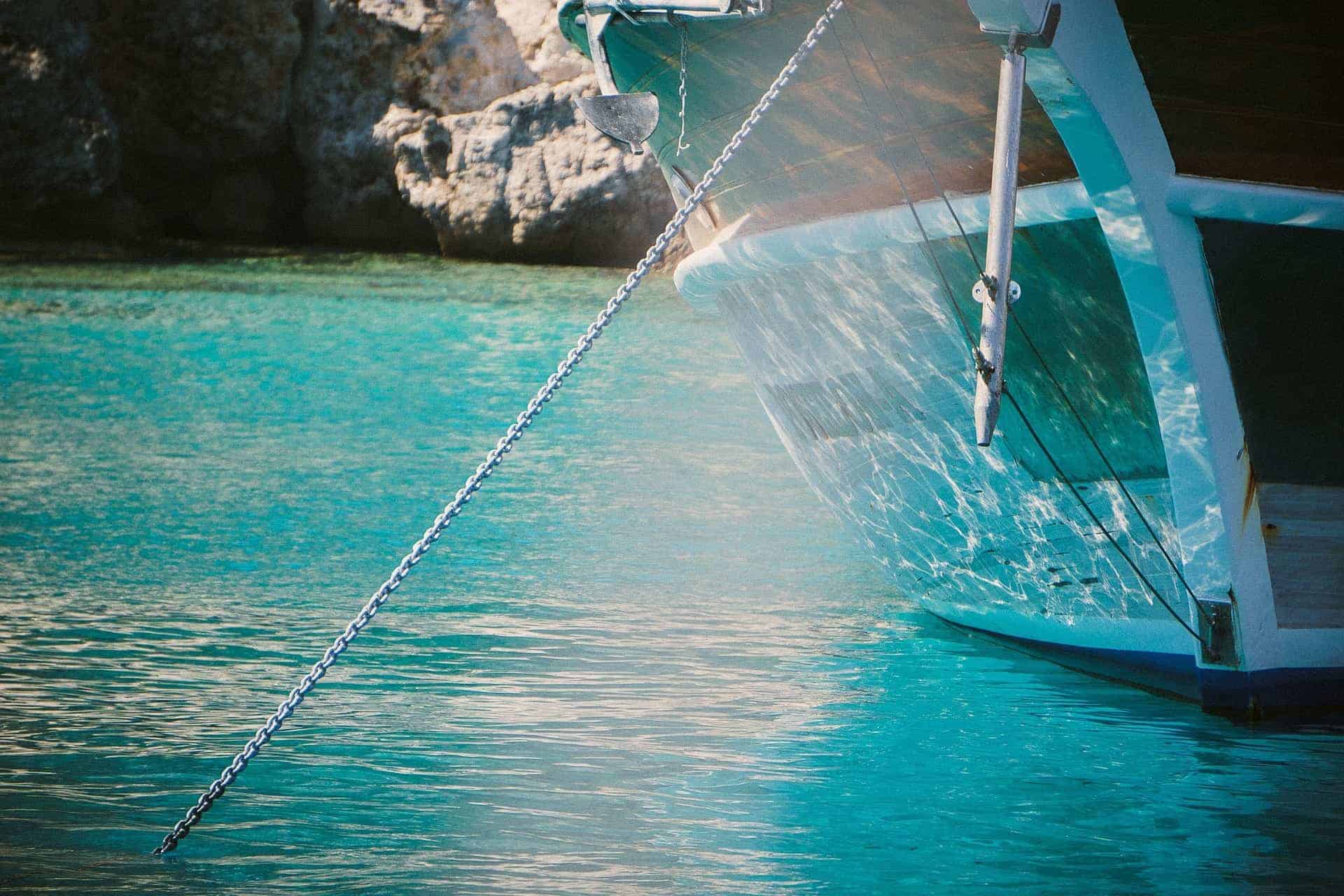 Cutting to the chase, Equipment Number (abbreviated as EN) is just a non-dimensional parameter which can be used to select the right sized anchoring and chain cables for a new ship. However, it is to be noted that these equipment are only meant for harbor mooring, and not for open sea or rough weather mooring.

Thinking in very basic terms, the problem at hand is to select the right set of equipment for anchoring/mooring a vessel at port/harbor. That brings us to the basic question – why do we need to anchor a vessel? The simple reason is to prevent it from drifting away. What causes the drift? It is the forces of the environment acting on the vessel. What are these forces? The forces are wind, current and wave. Wave is generally non-significant at harbors.

How is wind/current force on the vessel calculated? Wind and current forces are drag forces, and they follow the simple drag equation

where, F = drag force, ρ = density of the medium (air/water), V = speed of wind/current, A = Area of vessel exposed to wind/current

From the above formula, we can understand that the Area of the vessel exposed to the wind or current is a critical input in calculation of the drag force. Inferring further, Wind force will depend on the projected windage area of

Now that we know the basis of the calculation, let’s move on to establish the how a number (the Equipment Number) can be used to gauge the environmental forces for a vessel.

One thing is clearly obvious – that a bigger ship will have higher windage and current areas, and thus will attract higher forces. Similarly, a smaller ship will have smaller forces. These forces depend upon the projected areas, which become the determining parameter.

Also, we can infer that a ship with higher forces will need heavier equipment to anchor itself.

Thus, we can establish the following relationship 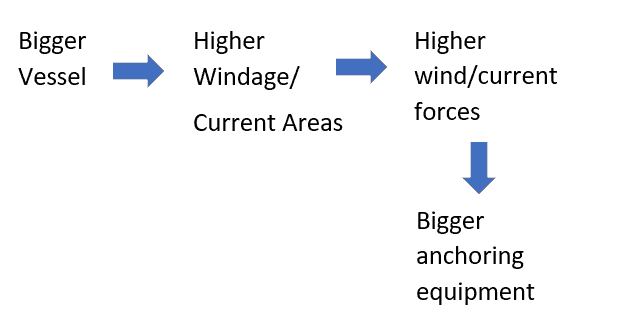 The above relationship is good to know but is obvious and not really spectacular or particularly helpful in selecting the anchoring or mooring equipment. The question remains – How do we select the right size equipment?

Do we go about calculating the forces for each port/harbor the vessel is expected to dock at? That will be a tedious exercise.

Won’t it be great if there was some standard table which recommends the equipment size based on the size of the vessel? That would make our lives much easier. Say, given the windage/current areas of the vessel and its topsides/superstructure, the table can belt out the sizes of anchors and cables to be used. Further, it will be much better to combine both windage and current areas as one input against which the equipment sizes can be presented.

For example, the DNV-GL rules provide the formula and table for EN in its Rules for Ships, Part 3, Chapter 11, Section 1-3. An extract of the EN formula is presented below: 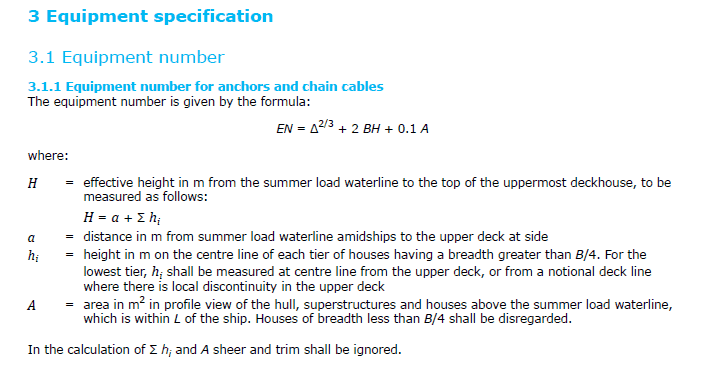 The formula is a sum of the different components of current and windage areas.

The following diagram from ABS Rules Part 3, Ch 5, Sec 1/3.5 demonstrates the calculation of H. Only deckhouses which have width greater than B/4 (B = breadth of the vessel) are considered in the calculation 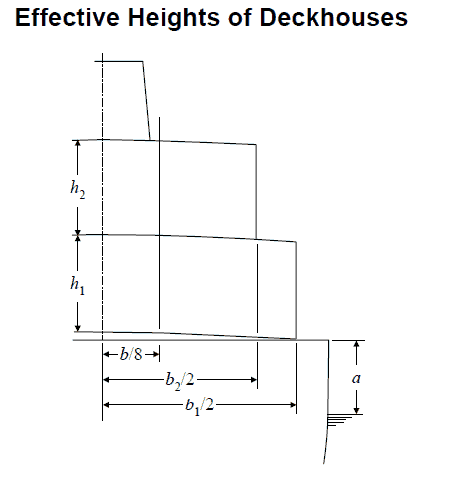 Once we have the EN, what next? How do we select the right sized equipment from EN? Once again, Class rules come to assistance.

Class Rules provide standard tables for getting the equipment sizes once the EN has been calculated.

Once such table for DNV Rules is shown below: 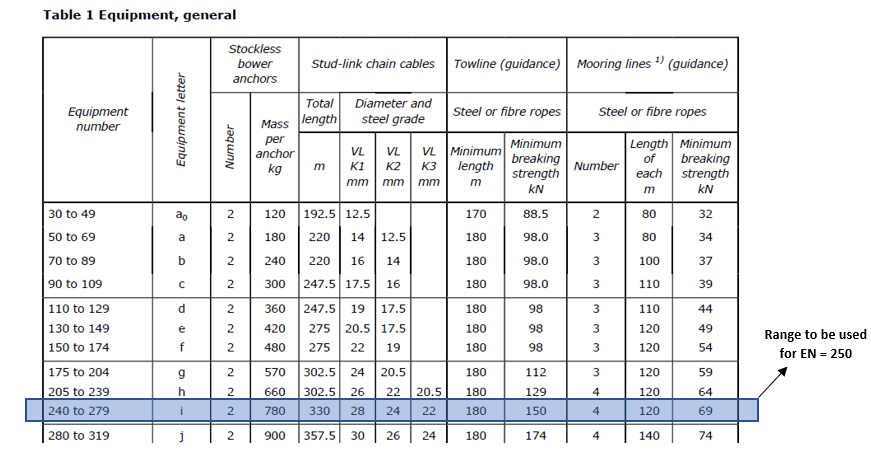 We can see above that the first column has different ranges of Equipment Number (EN). Every EN range is allotted an equipment ‘letter’ which is an alphabet (sometimes with a subscript). This is a notation used for classifying the equipment based on equipment number.

The above table is straightforward – from the value of EN, we locate the correct range in the first column. For example, if the EN is 250, then the range to be used is 240 – 279, as highlighted in the table above.

It is to be noted here that for the same vessel, the EN to be used for Towline and Mooring line selection can be higher compared to the EN used for the rest of the equipment (cables and anchors), since additional profile areas of deck cargoes are also included while calculating EN for towline/mooring line selection.

Please do take a moment to explore our product on Equipment Numeral Calculation:

This post is not meant to be an authoritative writing on the topic presented. thenavalarch bears no responsibility for the accuracy of this article, or for any incidents/losses arising due to the use of the information in this article in any operation. It is recommended to seek professional advice before executing any activity which draws on information mentioned in this post. All the figures, drawings and pictures are property of thenavalarch except where indicated, and may not be copied or distributed without permission. The views, information, or opinions expressed in the article are solely those of the author and do not necessarily represent those of TheNavalArch Pte Ltd and its employees