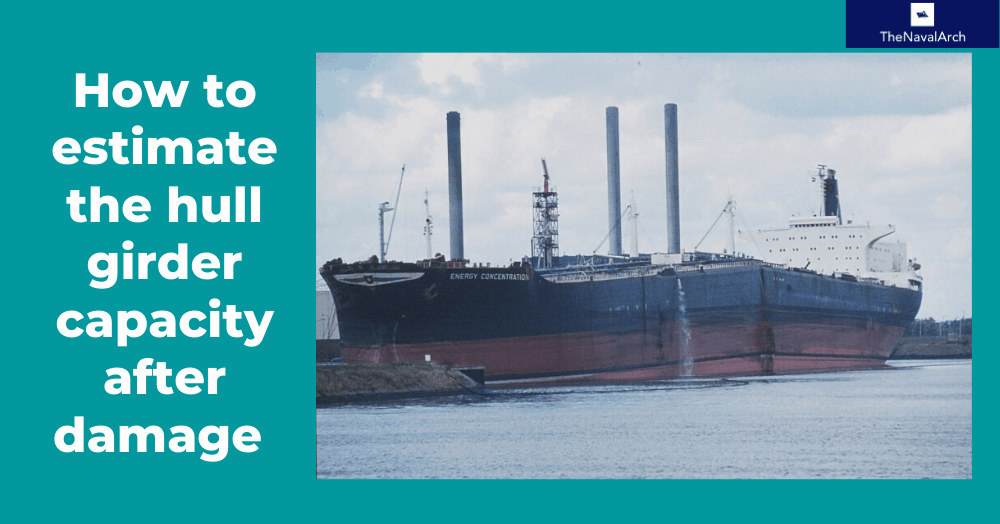 Ultimate hull girder strength represents the maximum capacity, of the hull girder beyond the structure fails.

In fact, if the vertical bending moment applied overcomes a certain maximum value, the ship can collapse (Figure 1) due to different phenomena as buckling and progressive collapse [1] of the compressed part.

Instances are famous cases of the oil tanker “Energy Concentration” that happened in 1980 and the container vessel “MOL COMFORT” in 2013. 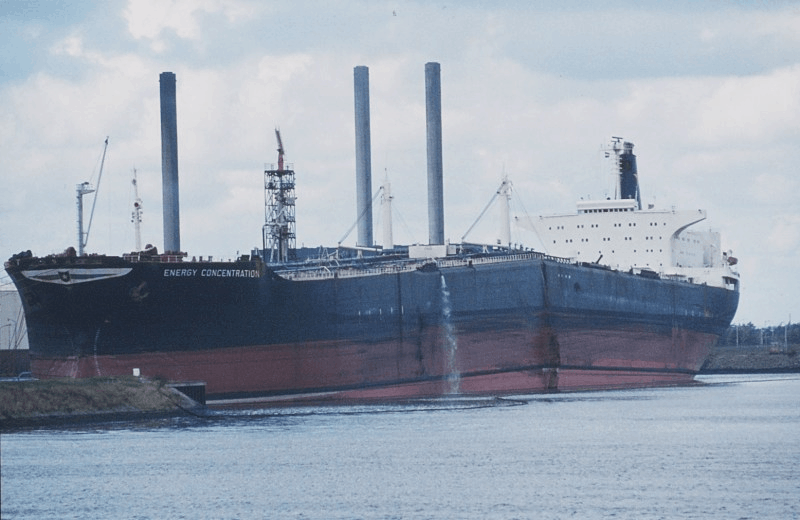 The estimation of the ultimate strength plays an important role in structural safety and for reliability in terms of loads during the life of the vessel.

In general, the ultimate hull girder capacity considers the evaluation of the overall strength by summing up the general load capacities of individual elements such as plates, stiffeners, girders within the cross-section.

Methods for determining the ULS

Several rule models can be used for calculating the ultimate strength.

The first method is quite well known and prescribed by IACS.

The original idea comes from Smith at the end of 70’s which developed a simplified method to evaluate the ultimate strength basing his approach on the following assumptions [3]:

The main steps (Figure 3) to consider for the procedure are the following [3] [4]: 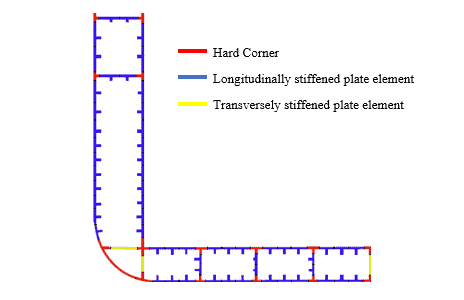 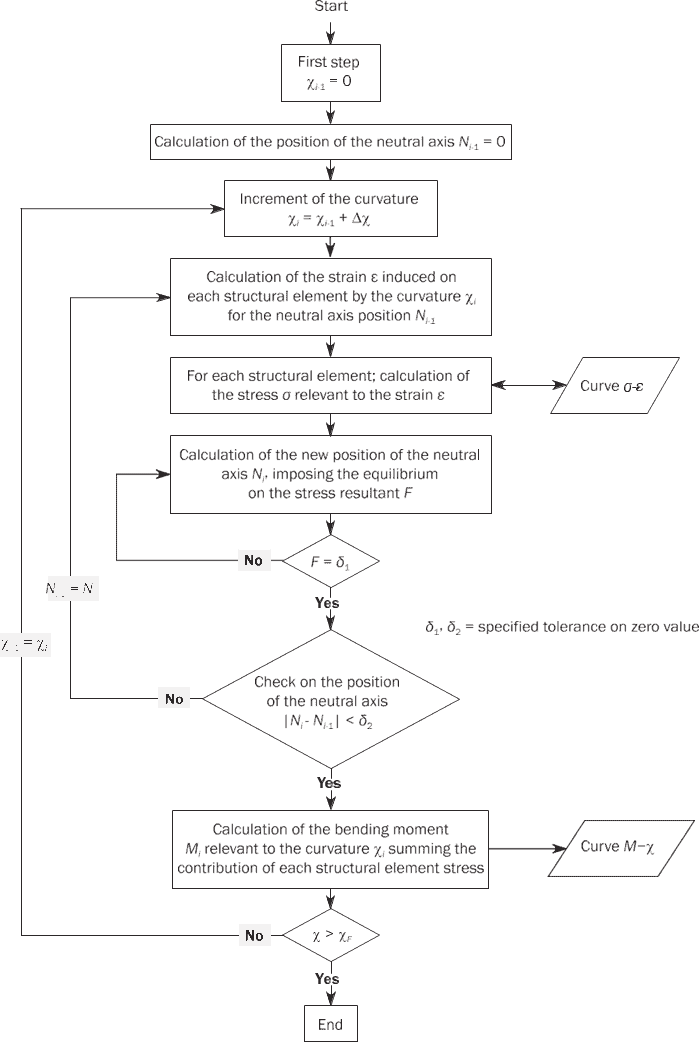 Figure 3 Description of the Smith Method [3]

2. The stress-strain relationships of individual elements are carefully considered and obtained, taking into account: the influences of yielding, buckling, and the initial Neutral axis.

4. Verification that the new neutral axis (which guarantees the equilibrium of stresses) differs with a low tolerance value in respect to that one assumed at begin of the procedure. If this condition is not fulfilled, it is necessary to reiterate all the process basing the calculation on the last neutral Axis obtained;

5. In case the previous step is satisfied, it is possible to calculate the bending moment. After that, it would be necessary to increase the curvature of a certain delta of increment;

The determination of the ULS plays an important role especially when the ship results damaged and the salvage operation is needed.

In fact, grounding or collision can lead to a reduction in the effectiveness of the structural elements and consequently to the reduction of ultimate strength. 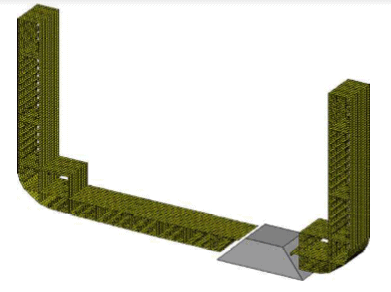 Figure 4 Damage due to  grounding [5]

In such circumstances, by neglecting the elements which belong to the cross-section (Figure 4) which do not carry anymore the longitudinal strength, it is possible to calculate the ULS (Figure 5).

In this context, the methods before mentioned could be applied, but paying attention to the symmetry/asymmetry of the damage Paik et al. [5] proposed an innovative method for assessing the safety of a ship which has suffered damage grounding through the application of R-D (Residual Damage) Diagram. 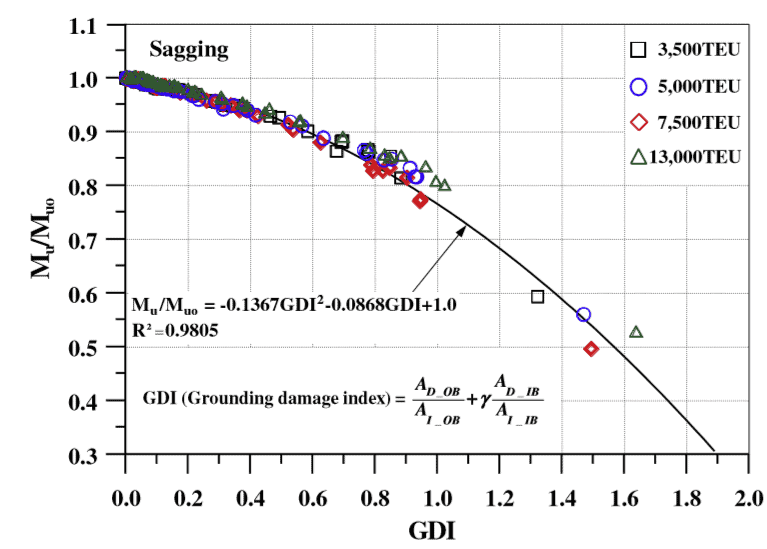 They are obtained in the following way.

First of all, the characteristics of the ships, including geometry, dimensions, and material properties are defined. Then a limited number of probable damage scenarios representing all possible scenarios can be selected by a

In practice, it means that a small number of probable scenarios for possible accidental or in-service damage are selected using for instance a sampling technique in which the random variables affecting the damage are probabilistically characterized.

Afterward, the GDI (grounding damage index) is defined for describing the damage severity for each of the considered scenarios.

The residual strength of the ships in the grounding damage scenarios is then calculated by using a simplified approach or by applying more complex methods, such as non-linear FEM (Finite Element Method).

Finally, the R–D diagram is established based on these calculations performed.

Furthermore, the GDI concept can be applied to determine the acceptance criteria for grounding strength performance [9].

For example, IMO (International Maritime Organization) specifies requirements that the ultimate longitudinal strength of all newly built ships be no smaller than 90% of the strength performance.

In general, those kinds of diagrams will be very useful for a first-cut assessment, immediately after it has been suffered a grounding, by knowing the damaged area.

The views, information, or opinions expressed are solely those of the author and do not necessarily represent those of TheNavalArch Pte Ltd and its employees