In an earlier article, we saw how to design stoppers for seafastening. Stoppers are items that are used to contain the translation movements (longitudinal and transverse directions) of a cargo on the deck/hold of a vessel.

That brings us to the question – what about tipping of the cargo? If the cargo is subjected to external forces that cause it to tip, how do we protect the cargo against tipping?

Thinking in basic terms, to prevent cargo from tipping/overturning, we will need something that pins or clips it to the deck. Such a seafastening item is called a ‘Clip’ or a ‘Dog Plate’. Imagining such an item, it can be an ‘L-shaped’ structure that clings on to the base of the cargo. If we see the figure below, the dog plate is like a jaw that clamps down on the base frame of the cargo. We can also see that this kind of structure will help prevent the overturning of the cargo, as compared to stoppers which can prevent only translation. At times, both dog plates and stoppers may be used together on the same cargo with dog plates resisting overturning and stoppers resisting translation. 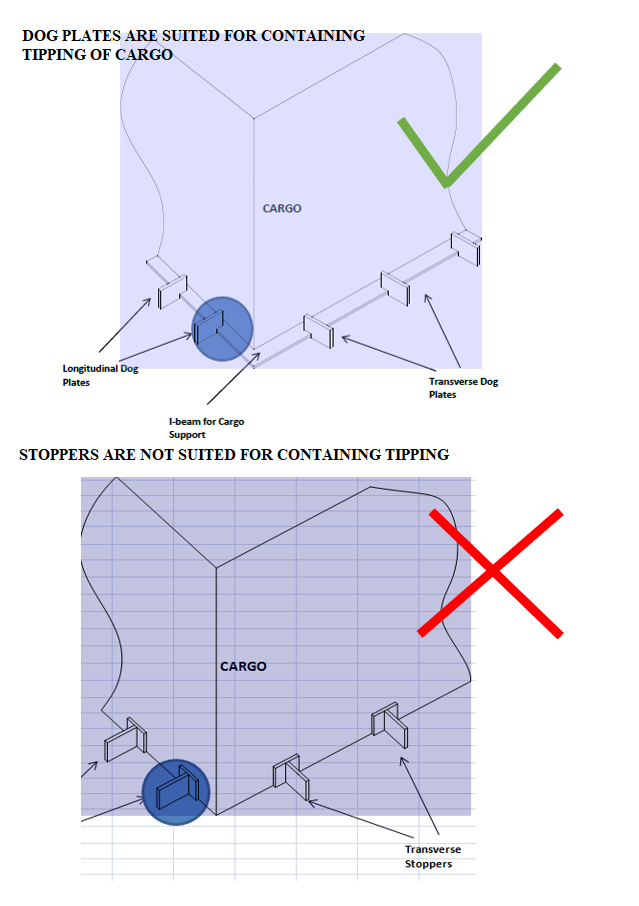 In this section, we’ll see how do we go about designing a dog plate for a particular operation.

Any design takes up the following flow:

Forces on the structure:

The cargo on the vessel will experience forces in the three directions – longitudinal, transverse, and vertical (uplift), besides the self-weight of the cargo. The first three forces depend on the environment in which the vessel is operating, and one simple but conservative way of calculating these forces is to follow DNVGL guidelines (See DNVGL-ST-N001, also see our product on Cargo Forces and Accelerations)

In the figure below that shows the plan of a vessel’s deck carrying cargo, we can see that there are multiple dog plates in each direction to resist the respective force (transverse or longitudinal).

The uplift force is a vertically upward force due to the cargo motion. It is calculated from a motion analysis or from empirical relations (See our product for Cargo Forces and Accelerations).

The cargo also experiences its own self-weight that acts vertically downwards.

The force diagram of the Cargo can be drawn as below:

We can see that given the location of the dog plate, the following forces and moments will be experienced by it:

Translation of forces to the Dog Plate

where B is the width of the cargo.

Next, we see the force diagram of the Dog Plate itself: 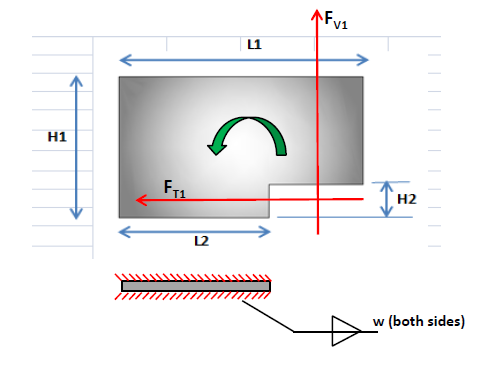 We can see that the following forces are acting on the dog plate:

Stresses on the dog plate

The above two forces lead to various stresses for which the dog plate needs to be analyzed:

By calculating the forces and moments applicable, the stresses can be calculated, and the suitability of the dog plate evaluated. Some sample calculations are shown below: 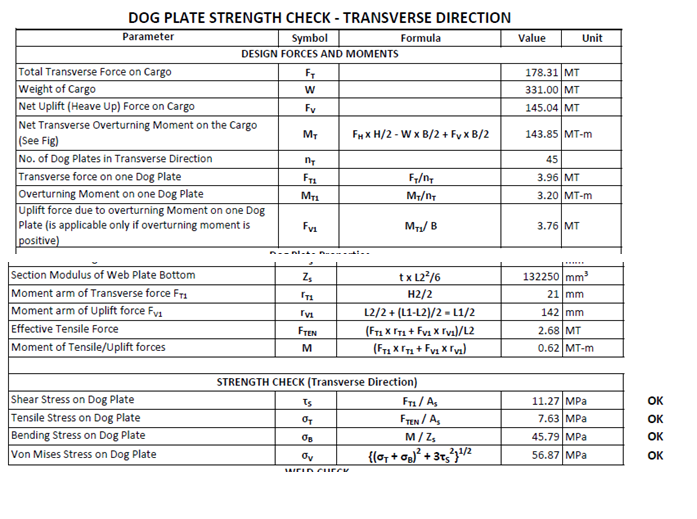