In some cases, the vibrational loads of the structure may also result in fatigue. Usually, it is the welds which develop the cracks first that then propagates to the rest of the structure.

The key concepts here are Fatigue Demand and Fatigue Strength. The former is the amount of stress that the structure experiences due to the variable loads, while the latter is the capacity of the structure to withstand fatigue loads. If the fatigue strength is more than the fatigue demand, the structure is safe.

Since the load varies, the stress too varies about a mean value. The fatigue demand is calculated in terms of stress ranges that the structure experiences. The best way to calculate Fatigue demand is through a thorough structural analysis

Since fatigue is a result of cyclical stress, it will be useful to know how many cycles of stress a material can withstand under a certain stress range before it fails. This is the approach adopted by the S-N curves method. S-N curves are plots of stress range versus the number of cycles to failure for a material. These curves are plotted based on experimental tests done on specimens.

The general relationship between the Stress Range (S) and the number of cycles to failure (N) is given by:

Here, A and m are ‘fatigue strength coefficient’ and ‘exponent’ respectively and are determined from tests. Usually both N and S are displayed on logarithmic scales.

In the approach used by ABS Guide for Fatigue Assessment, two-segment S-N curves are used. They look like the below: 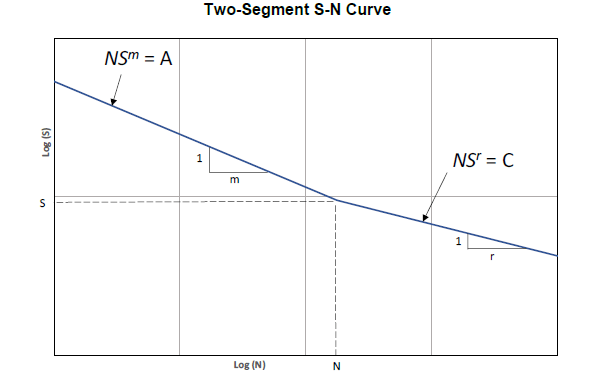 A consideration in these calculations is that linear cumulative damage (as in the Palmgren-Miner method) applies.

Further, the S-N curves are presented according to the ‘class’ of the geometrical details of the structure. There are eight such nominal classes: B, C, D, E, F, F2, G, and W. The details of these classes can be found in APPENDIX 1 of the ABS Guide on Fatigue Assessment of Offshore Structures.

The following parameters are obtained from the S-N curves:

There may be multiple environments throughout the lifetime of the structure, and each will contribute to the assessment. Each environment case will be characterized by its significant wave height, the zero-crossing period and wave occurrence fraction. The ‘Wave Occurrence Fraction’ represents the percentage of time that the structure encounters a specific load case. So, basically it is the contribution of that fatigue case towards the total fatigue damage. The sum total of wave occurrence fractions for all fatigue load cases should be 100. The load cases may look like this:

In the simplified fatigue assessment method, the two-parameter Weibull distribution is used to model the long-term distribution of fatigue stresses. The cumulative distribution function of the stress range can be expressed as

The fatigue assessment involves calculating the individual fatigue damage for each load case, and then adding them up together to give the cumulative fatigue damage of the entire structure.

The steps for calculation of individual fatigue damage are shown below:

Once we have the fatigue damage calculated for each individual load case, we can calculate their cumulative damage by summing up the damage inflicted by environment bins. If the cumulative damage exceeds the required damage with a requisite safety factor, then failure is predicted to occur.

That was a summary of Fatigue analysis of offshore structures using S-N curves based on ABS rules. The calculation itself can be performed using a spreadsheet development. Please do check out TheNavalArch’s own product for performing fatigue analysis.