Designing bolts for a joint connection

Bolts are very commonly used fastening items and used in a variety of configurations. In this article, we will explore in-depth the design of a bolt used in connecting two members at a joint (bolted joint). We’ll see what properties of the bolt are important for its sizing, look into the forces the bolt will experience, and also evaluate the stresses which it will experience.

The guidelines/regulations followed for this article are based on Eurocode3.

A bolted joint comprises an incoming member welded to an endplate. The endplate has got bolt holes for connection to another member. We can see this in Figure 1 below. 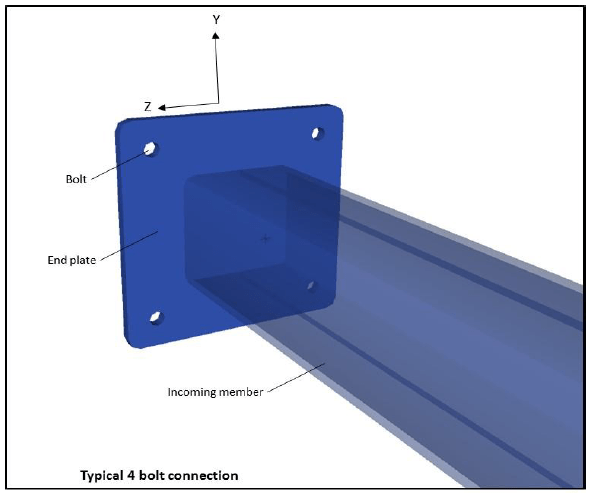 Forces on the bolted joint

Looking at the figure above, we can see that the forces and moments are as below:

The above six forces/moments should be known to the user before commencing the bolt’s design.

Material Properties of endplate and bolts

The material properties of the endplate and the bolts are the starting inputs for the calculations. For the plate, the yield strength, tensile strength, and material factors are needed.

The geometry of bolts depends on the class of bolt selected. Different classes of the bolt as per the Eurocode 3 are: M10, M12, M16, M20, M24, M27, M30, and M36. Each of them is characterized by the following properties: bolt diameter, bolt hole diameter, and bolt area.

The plate geometry is characterized by the following:

The spacing of bolts, the end distances from the plate, etc. are subject to some minimum requirements. These are shown below.

p1,p2,e1,e2 are the distances as shown in figure 2, and d0 is the bolt hole diameter, while tp is the plate thickness

With the inputs and geometry check in place, stress assessments of the bolts is the next step.

The checks for an individual bolt can be performed by calculating the design resistances of a bolt. These include the following and are derived from the material and geometrical properties of the bolt

Following the above, the checks for the bolt’s design are performed to calculate the different unity checks as listed below.

Each of the above checks should result in a UC value of less than 1.0 for the bolt.

That completes this article on designing bolts for joint connections. Please do check out TheNavalArch’s own app on bolt design, and let us know in the comments section if you have any queries.

Bolt Check Spreadsheet (based on Eurocode 3)